How do I calculate lattice points per unit volume? [duplicate]

My professor was explaining simple cubic, body centered cubic, and face centered cubic lattices and I didn't quite understand the calculations below:

Can someone explain the reasoning behind these values in the equations?

You have to imagine a cube with spheres (the atoms) on the corresponding locations. Now you have to look at how much of each of these spheres is inside the cube (please see Patrick Moloneys answer for very descriptive images).

Atoms on the corners, edges, and faces of a unit cell are shared by more than one unit cell.

An atom on a face is shared by two unit cells $\implies$ half an atom belongs to each unit cell.

An atom on the edge is shared by four unit cells 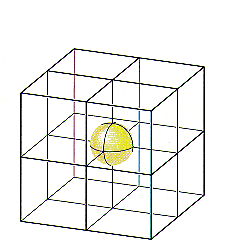 What does this have to do with the equations?

Well lets say we have an sodium atom that is crystallized in a simple cubic unit cell, then there would be an sodium atom on each of the eight corners of the cell. However, only $\frac{1}{8}$ of these atoms can be assigned to a given cell. Hence the simple cubic structure is

Not the answer you're looking for? Browse other questions tagged crystal-structure crystallography or ask your own question.

-1
Number of atoms per unit cell

10
Confusion in unit cells of crystal system
3
What are Lattice Points?
9
How many crystal forms of HCl have been identified - where to find the unit cells/lattice constants?
2
How to determine the edge length of the aluminium unit cell?
1
Why lattice constant (unit cell) is always a parallelepiped?
4
Miller Indices and the case of a cubic crystal
3
Importance of zinc blende and wurzite crystal structures for semiconductors?