When writing my diploma thesis I had to name my molecules following IUPAC nomenclature rules. There were several molecules like the following one, that contained two TEMPO groups, but were not symmetrical. The following is one example: 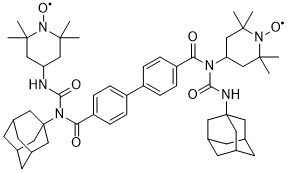 While I was able to find IUPAC recommendations on how to name radical organic molecules I could not find sufficient information for this case and ACD/Labs was no help either. I went ahead and replaced the two TEMPO groups with COOH, as this is a high ranking moiety, got a name for it and replaced the corresponding parts of the name with what I found (carboxy to ylooxy; carboxylic acid to oxidanyl) in the recommendations.

This was the name I came up with:

In the meantime, the results have been published but I always wondered, if this was correct. I checked on SciFinder (CAS No. 1947339-77-6) and an index name has still not yet been assigned.

Is there a more elegant way of finding a name for a molecule like this?

The structure can be redrawn somewhat more clearly: 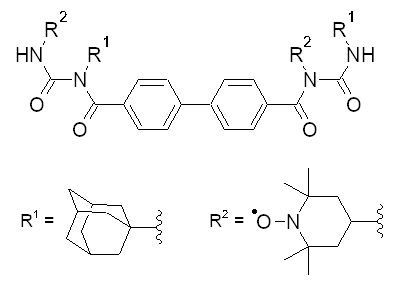 If your name was, after fixing some enclosing parentheses to square or curly brackets, even the ‘preferred IUPAC name’, it's not a nice one, because it does not reflect the symmetry of the skeleton, and repeats the TEMPO and adamantane building block names.

(From now on, I'm gonna use the blockquote for IUPAC organic nomenclature rules 2013 generated names, or the book citations, if section name included.)

The skeleton is named

substituted with carbamoyl ($\ce{NH2-CO\bond{-}}$) groups at each nitrogen.

according to the rules of making the radical to be prefix (e.g. when there is yet more prioritized radical):

however the rules do not make a good distinction between residues (prefixes) and radicals.

The allophanoyl- prefix can be found in the older IUPAC 1979 nomenclature, rule C-971.

The skeleton could be named

But now we would have to repeat the two differently substituted allophanoyls in the name. Or derive a name from the symmetrical one, but how to number it?

Closer look at your structure reveals that it in fact is two N,N′ asymmetrically substituted urea

P-66.1.6.1.1.1 The compound $\ce{H2N-CO-NH2}$ has the retained named ‘urea’, Which is the preferred IUPAC name, With locants N and N′, as shown above the structure below. The systematic name is ‘carbonic diamide’. The locants 1, 2, and 3 have been used in the past and may be used in general nomenclature.

$$\bbox[0.5em,border:1px solid black]{\text{Numerical locants for urea are no longer used in the IUPAC preferred names.}}$$

And that's a correct name, used e.g. in

(If these propanoic acids were interconnected by different carbons, 2,3′ (there's no other option), such multiplicative name would be no longer a preferred one; see e.g. P-15.3.2.1.1. But never mind, we're making a nice one.)

So we'll use the other urea numbering, the numerical, non-preferred one.

Not the answer you're looking for? Browse other questions tagged nomenclature radicals or ask your own question.

4
How is a side-group that contains a double bond named?
6
Nomenclature and chemical formulae for bridged dinuclear chromium complexes
2
Omission of locants for functional groups in IUPAC names
6
How is nomenclature decided in this case (formyl vs oxy)?
0
IUPAC nomenclature of cycloalkadienes with substituents and alkenes on the same carbons