Products of Reimer–Tiemann reaction of 4-methylphenol

p-cresol (4-methylphenol), undergoes the Reimer–Tiemann reaction upon treatment with chloroform ($\ce{CHCl3}$) in alkaline medium. Which of the following is the major and minor product?

The answer given is that B is the major product, and C the minor product.

I have two questions about this:

The Reimer-Tiemann reaction is known as the ortho-formylation of phenols under strongly alkaline conditions.

It's not an addition of a carbene to a double bond, like the Simmons-Smith reaction, the pyrrole to pyridine ring enlargement or the Buchner expansion, which is catalyzed by transition metals.

As ron already pointed out, pH is one crucial requirement, having a phenol (and not just any other arene) is the other. 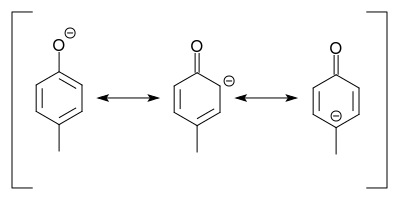 What we're actually facing here is the addition of a carbanion to a strongly electron-deficient carbene.

As again already described by ron, there is significant charge density at the 4-position of the phenolate, and the initial addition step might indeed happen here too.

The resulting intermediate can't rearomatize other than in a back reaction and that's what it will mainly do! Only a minor part will grab a proton and yield C.

That was close, but no cigar! Let's have a look at the addition at the 2-position.

Through the interplay of dienone, phenolate and phenol we get rid of one chloride and all further steps to the final benzaldehyde are likewise assisted by this tautomerism.

We still haven't answered the question why no 1,3-dialdehyde is formed. Let's have a look at the major product B under alkaline conditions and its resonance structures.

One of them looks like the enolate of a 1,3-dicarbonyl conpound, with additional charge distribution over the $\pi$ system.

This species has a significantly lower localized electron density than the anion of the starting material. So, the party stops here.

Edit In a comment, it was asked whether the geminal dichloride will convert to the corresponding aldehyde under alkaline conditions.

Such a transformation could involve a nucleophilic substitution, leading to a geminal halohydrine which then eliminates HCl to furnish the aldehyde.

In the case of benzylic dihalides, this is possible even without the intramolecular assistance of a phenolate (cf. this example) using secondary amines as a base and in the case of diphenyldichloromethane, the transformation to benzophenone is achieved by heating in the presence of water.

In the case of C, the simple deprotonation of the dihalide might be a dead-end alternative pathway to substitution.

The reaction is run under basic conditions. Early in the reaction, the phenolic proton is removed to generate the phenoxide anion. If you draw resonance structures, you'll see that negative charge is delocalized to the ortho and para positions. Dichlorocarbene, an electrophilic species is also generated from the chloroform and the base in this reaction. The dichlorocarbene will preferentially attack the electron rich ortho and para positions in the phenoxide anion. The para intermediate is often isolated as a cyclohexadienone (your product C), whereas the ortho intermediate usually reacts further due to the adjacent phenoxide oxygen playing a role, going on to the aldehyde. Here is an old, but good reference, showing the scope and mechanism of the reaction. It is generally not a clean or high-yielding reaction.

Not the answer you're looking for? Browse other questions tagged organic-chemistry reaction-mechanism aromatic-compounds or ask your own question.