What is the correct way to notate conformation preferences of polysaccharides?

In some webpages (1 or 2) are found the way to notate the conformational preferences of monosaccharides such as furanose and pyranose.

But, it lacks to give a brief description on how to do it with polysaccharides.

For a given example: 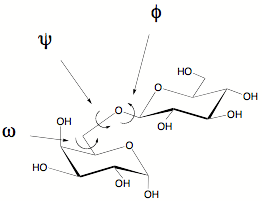 What is the proper way to notate?

If I understood the question correctly, your first notation looks correct and less ambiguous.

Common polysaccharides (glycogen, starch, and cellulose are composed of pyranoside subunits (having six-membered rings)). Such molecules can be represented as a series of rigid pyranose rings connected by an oxygen atom bridging two carbon atoms (the glycosidic bond).

There is, in principle, free rotation about both $\ce{C–O}$ bonds linking the residues , but rotation about each bond is limited by steric hindrance by substituents. The three dimensional structures of these molecules can be described in terms of the dihedral angles,ϕ and Ψ, about the glycosidic bond.

The bulkiness of the pyranose ring and its substituents, and electronic effects at the anomeric carbon, place constraints on the angles ϕ and Ψ thus certain conformations are much more stable than others, as can be shown on a map of energy as a function of ϕ and Ψ: 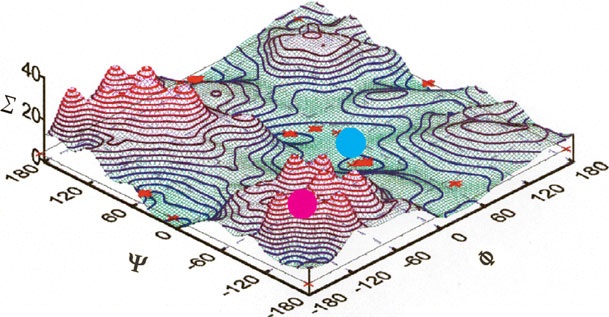 (a) When the relative energy (Ʃ) is plotted for each value of ϕ and Ψ with isoenergy (“same energy”) contours drawn at intervals of 1 kcal/mol above the minimum energy state, the result is a map of preferred conformations.

A map of favored conformations for oligosaccharides and polysaccharides. 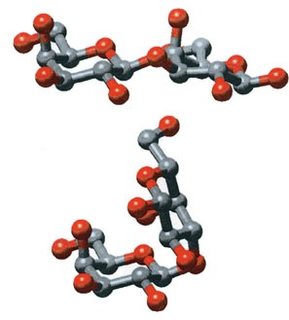 Conformation at the glycosidic bonds of cellulose, amylose, and dextran. 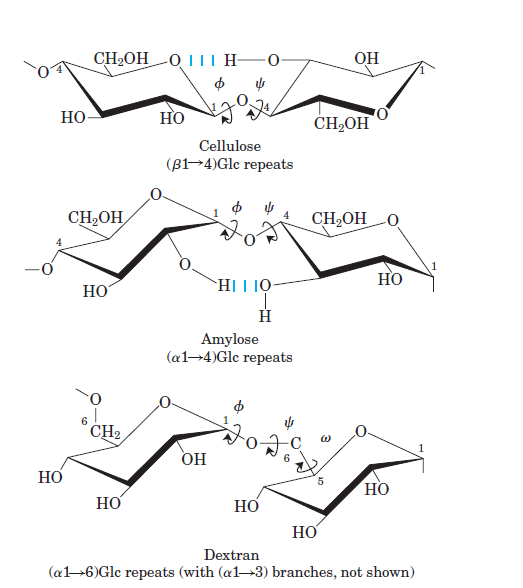 So the notation considering the glycosidic linkage will be $\ce{Glu(ϕ)-(β1-4)-Glu(Ψ)}$ or another detailed way of illustrating this is $\ce{C1(ϕ)-O4(Ψ)-C4}$ for cellulose.

There are other ways of illustrating polyasacharides notations, and their side groups e.g hydroxyl group (in newman projection)

For the precise specification of the orientation of a polyatomic ring substituent, it is necessary to specify the torsion angle about the exocyclic bond.

Not the answer you're looking for? Browse other questions tagged nomenclature biochemistry notation carbohydrates conformers or ask your own question.