Why does [18]annulene show only one peak in its proton NMR at $\pu{100^\circ C}$? Does any structural change happen such that all the hydrogens are alike?

The aromaticity of [18]-annulene1 was confirmed by room temperature 1H NMR (60 MHz) in 1964.2 [τ values have been converted to δ values; δ = 10 - τ] When the spectrum was recorded at room temperature the 12 deshielded, exterior hydrogens appeared at δ 8.9 while the 6-interior hydrogens were highly shielded (δ -1.8). Evidence for flexiblity in the ring at room temperature was confirmed by observing a further downfield shift of the 12 hydrogens (δ 9.28) and an upfield shift of the 6 hydrogen signal (δ -2.99) when the spectrum was recorded at -60oC. Recording the spectrum at 110oC caused the two signals to coalesce to a singlet peak at δ 5.45. This value is close to the weighted average of the resolved chemical shifts. Ostensibly, the coalesence is due to the interchange of external and internal hydrogens. When the sample is cooled, the resolved spectra are restored. 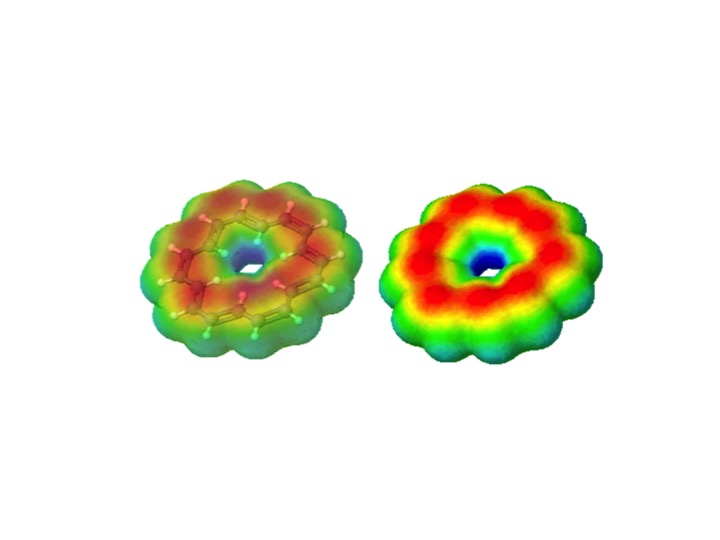 Very roughly, we would expect aromaticity to do two relevant things:

With $18$ atoms in the ring the energetic effect is decreased to the point where the ring isn't really all that rigid. It becomes fluxional on warming.

This is one of many examples of aromaticity not always having all the effects we're accustomed to seeing in benzene rings.

3
Assigning 1H NMR spectrum and predicting peak coupling patterns for 2H-1-benzopyran-2-one
4
Why only one peak is observed in NMR spectrum of H2?
12
Why is tetramethylsilane (TMS) used as an internal standard in NMR spectroscopy?
4
How to explain two NMR spectra of the (allegedly) same compound with slightly different shifts?
5
Carbon-13 NMR for chloroform
7
What could cause a peak to split into 2 resonances as temperature increases in NMR spectroscopy
1
NMR of trigonal bipyramidal molecules
0
Why do certain signals in proton NMR experience extensive splitting despite only having 1 neighbour?