Why is an energy cost associated with splitting the HOMO spins in singlet oxygen?

Hund’s rule sufficiently predicts that the triplet $\mathrm{^3\Sigma_g^-}$ state is the most stable, i.e. lowest in energy. When one speaks of singlet oxygen, one typically has the $\mathrm{^1\Delta_g}$ form in mind which is $\pu{0.98eV}$ higher in energy than triplet oxygen according to a group member’s recent literature seminar. This is often explained on this site by the fact that spin pairing puts another electron into the space that is already populated by one electron, causing electron-electron repulsion that must be overcome by adding energy.

Why is this so?

Short story: The comment by orthocresol is correct, based on Hund's rules. Given the same spin multiplicity (i.e., the two singlet states), the state with higher orbital angular momentum ($\mathrm{^1\Delta_g}$) wins.

Loosely speaking, one can imagine that comparing the two singlet states, the higher angular momentum implies that the electrons are a bit further out, and suffer less electron-electron repulsion.

The "unified atom" model can apply to simple diatomics - that is, many of the same considerations for the electronic structure can be used for multi-electron atoms. There's discussion in both Mulliken (Rev. Mod. Phys. 1932, 4, 1. and Herzberg's Spectra of Diatomic Molecules). 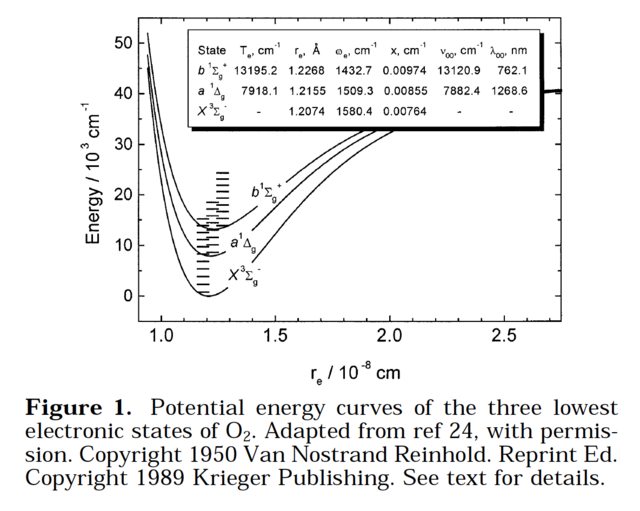 We can assign the lines as discussed by Mulliken in 1932:

Reference 118 is to Hund and Hückel:

Both Mulliken and Herzberg discuss the Hund's rules in regards to many diatomics - that the triplet will lie lower than the singlet because of higher S, but then the two singlet states will differ based on angular momentum (here L).

Not the answer you're looking for? Browse other questions tagged molecular-orbital-theory electronic-configuration or ask your own question.

3
A reversible exothermic reaction between a molecule in an excited triplet state and a reducing agent
32
Is there an energy cost associated with flipping the spin of an electron?
11
Is s-p mixing referring to hybridization or is it the mixing of one atoms s orbital with the other's p orbital?
1
My text seems to say that the high(est) energy orbitals are not valence orbitals - everything else says otherwise. What's true?
7
Why do iron(II) ions and chromium have different electronic configurations?
5
Predicting the generation of singlet oxygen
7
The electron configuration and electron density distribution in singlet oxygen
0
Adding cyanide vs nitrite for nucleophilic substitution and why does it change when we use silver salts for it
9
Hybrid orbitals, photoionization and time dependence