Why does the 3rd electron shell start filling up with scandium?

What causes the 3rd shell to start filling up, rather than the fourth? 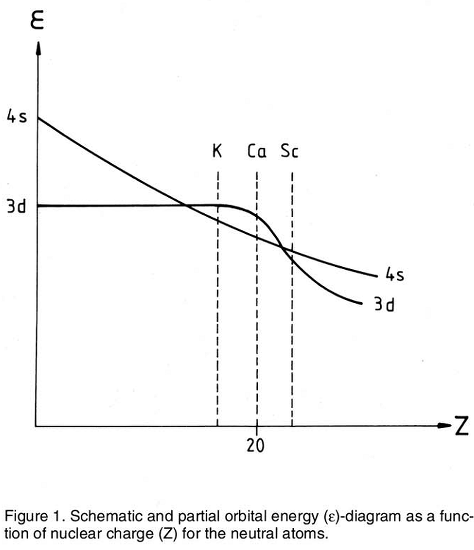 Looking at this graph, by all means the electronic configuration of scandium should in fact be $\ce{1s^2 2s^2 2p^6 3s^2 3p^6}$ $\color{blue}{\ce{3d^3}}$ in order to minimize orbital energies! The graph does not show the energy of the $\ce{4p}$ subshell, but it would lie somewhat above both curves shown. However, there is an important effect not being considered here, which is the destabilizing interelectronic repulsions. Electrons in a same subshell tend to repel each other more (intrasubshell repulsion) than electrons in different subshells (intersubshell repulsion). It turns out (and no one can really qualitatively explain why, see below) the repulsion is such that in an atom with $Z=21$, the configuration $\ce{[Ar] 4s^2 3d^1}$ is lower in energy than other potential candidates, such as $\ce{[Ar] 3d^3}$ or $\ce{[Ar] 4s^1 3d^2}$. Theoretically, the odd configurations $\ce{[Ar] 4s^2 4p^1}$ or $\ce{[Ar] 4s^1 3d^1 4p^1}$ would have lower interelectron repulsion energies than the observed ground state, but in these cases the lowered interelectron repulsions do not compensate the requirement of populating the higher-energy $\ce{4p}$ subshell. The comparison of several possible electron configurations and the joint minimization of orbital energy and electron repulsion energies does not seem to be something that can be done without resorting to heavy calculations or direct experimental validation.

In addition to some material I linked in comments, this article from Eric Scerri's blog (a chemist who focuses on aspects of periodicity, including electronic distribution) states, regarding the electronic configuration of scandium compared to calcium and to the $\ce{Sc^3+}$ ion (emphasis mine):

This amounts to saying that all three of the final electrons enter $\ce{3d}$ but two of them are repelled into an energetically less favourable orbital, the $\ce{4s}$, because the overall result is more advantageous for the atom as a whole. But this is not something that can be predicted. Why is it 2 electrons, rather than one or even none? In cases like chromium and copper just one electron is pushed into the $\ce{4s}$ orbital. In an analogous case from the second transition series, the palladium atom, the competition occurs between the $\ce{5s}$ and $\ce{4d}$ orbitals. In this case none of the electrons are pushed up into the $\ce{5s}$ orbital and the resulting configuration has an outer shell of $\ce{[Kr] 4d^10}$.

None of this can be predicted in simple terms from a rule of thumb and so it seems almost worth masking this fact by claiming that the overall configuration can be predicted, at least as far as the cases in which two electrons are pushed up into the relevant s orbital. To those who like to present a rather triumphal image of science it is too much to admit that we cannot make these predictions. The use of the sloppy Aufbau seems to avoid this problem since it gives the correct overall configuration and hardly anybody smells a rat.

So unfortunately, it seems that even though most of the effects which combine to result in the observed electronic configurations are known, there is no qualitative way to predict where the configurations are going to mismatch with the Aufbau principle or the energy levels of the orbitals. I have read the statement that the Aufbau principle is most decidedly wrong for practically every atom with respect to the placement of the orbital energy levels, but incredibly it happens to predict the configuration of the valence shell for most atoms.

The electron configuration for scandium is:

The $\ce{4s}$ and $\ce{3d}$ orbitals are relatively close in energy, so there are a few anomalies in the order of filling. A fair question might be, why isn't the scandium electron configuration $\ce{[Ar] 3d^3 4s^0}$. There is a special stability associated with completely filled orbitals, so the $\ce{3d^1 4s^2}$ configuration is of lower energy than the alternative $\ce{3d^3 4s^0}$.

13
Why do 3d orbitals have lesser energy than 4s orbitals in transition metals?
2
What is the correct order of subshell energies?
1
Why do PES graphs list 4s after 3d?
0
Why is the valency of the Calcium (Ca) Bohr model, set to 2 electrons, instead of 1 electron for stability?
1
Why does potassium have the electronic configuration of 2.8.8.1?
-1
Why is there a drastic drop in the energy of d orbital after Ca?
0
Electron shells and subshells energies
69
Why do elements in columns 6 and 11 assume 'abnormal' electron configurations?
17
Hybridisation of Mn in potassium permanganate
26
While filling electrons, we follow Aufbau principle, but not while removing them. Why is this so?
See more linked questions

17
Plutonium having more oxidation states than samarium?
3
What is meant by complete outer shell? Why do the noble gases have zero valency?
35
Why is gold unreactive when only one electron is in the outer shell?
3
Why does the nature and oxidation state of a central metal affect field split?
1
Why does the Most Stable State of an Atom Tend to be One with Full s and p Subshells?