How to separate two diastereomeric amines?

I am developing a method to synthesize amines using organometallic catalysts and my reaction yield these two diastereomeric amines ($\ce{R2N}$ is, in this case, a morpholine group). 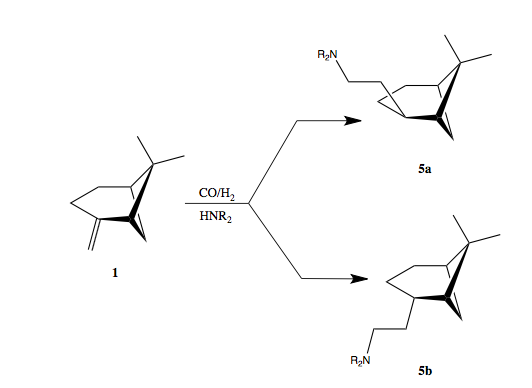 With both being formed in approximate equal amounts, making it almost impossible to identify their structures by NMR without separating them. All the NMR spectra look like a mess since some signals get duplicated and some not. I have a hint that they are actually these two amines because they show the same molecular ion in the MS spectrum and the methodology used for synthesis offers little space for doubt, since it always forms the predicted structure.

I would like to know, if there is a practical way of separating those two compounds without using something super fancy like chiral column chromatography decorated with gold and antibodies kind of stuff. I have tried column chromatography but couldn't find a solvent system that could separate them. I also tried recrystallization (though I don't know exactly why I tried it), it also didn't work.

When you mentioned column chromatography I had to assume you meant flash chromatography or biotage, which by implication is normal phase. When people mention HPLC they are normally defaulting to reverse phase. Now, if you can get reverse phase TLC plates (C18 are available) , you could make some advances. The issue though is then getting the silica and you also mention large quantities.

Large lab scale to me is say, 50g plus. For this, I would advocate crystallisation, but to guarantee some differentiation, I would make salts with organic acids. Nitrobenzenesulfonate salts are renowned for giving well defined crystals.

If you needed something to better differentiate again the two amines, I would try a camphorsulfonate salt (pick an enantiomer). These tend not to be too expensive. The salts then have different solubilities and the right solvent becomes a screening exercise. Otherwise, tartaric acid is very cheap and easy to salt break after crystallisation.

Separating the two compounds should not be the issue. They are diastereomers, meaning they show different chemical properties which should be different enough to allow separation. The more difficult question is how to locate the separated substances.

I assume very strongly that standard, average HPLC should do the separation trick. It is commonly used to separate very similar compounds. There is no need for a chiral stationary phase as you already have diastereomers. The issue remains how to identify the products since they likely won’t show any significant absorption at any accessible wavelength.

You did mention that you performed MS measurements. Most MS measurements I have seen were actually HPLC-MS or GC-MS. If you have access to a HPLC-MS, you can check whether the standard gradient gives two peaks or a double peak in the graph that shows the total mass caught by the mass analyser. (Careful: these peaks are not quantitative!) If you already have two peaks, you should be able to directly port the separation method to preparative or semi-preparative HPLC. Be sure to collect a fraction after every ten or so millilitres (assuming a column designed for up to $\pu{60mg}$ and a flow rate of about $\pu{7ml/min}$). Then, analyse all these fractions by HPLC-MS again to identify which contain the first eluting and which the second eluting peak.

If you observe a double peak in the HPLC-MS, you will first need to improve the gradient to allow for separation. For close peaks it is often a good idea to choose an isocratic method over a gradient method. The rest remains the same.

If you have access to other, more rapid methods of identification (i.e. you can tell the two compounds apart on TLC) you can of course use these rather than running tens of HPLC-MS experiments and thereby take strain off your colleagues’ nerves. (However, if you have an autosampling mechanism you might run the experiments overnight instead.)

Not the answer you're looking for? Browse other questions tagged organic-chemistry synthesis molecular-structure chromatography or ask your own question.