I am uncertain about the structure of $\ce {H_3PO_4}$ because different sources show different ones.

The structure shown here is: 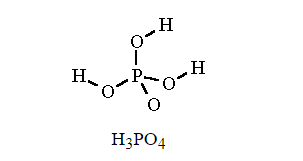 while Wikipedia gives this one: 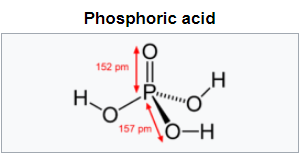 Arguments in favour of the 2nd structure:

$\ce {H_3PO_4}$ is different from phosphate ion.None of the answers in the linked question directly state what would be the more contributing structure. They focus on the hybridisation of P in phosphate.

Both structures are not the main contributing structures. In fact, the first structure is outright wrong and should be marked as an error as the electrons of phosphorus do not add up and the non-protonated oxygen is implied to be a radical.

However, the correct most contributing structure can be derived from the first structure simply by adding formal charges: a formal positive charge on phosphorus and a formal negative charge on the non-protonated oxygen. This structure satisfies the stability conditions well:

3
Proper Resonance Structures
5
Why is NH2 negatively charged?
4
What is the correct Lewis structure of diazomethane?
16
How to determine the worst resonance structures out of a given set?
4
Are the Phosphate and Sulfate ion diagrams with double bonds an invalid picture?
5
How can three p orbitals per atom bond in tin (II) sulfide?
4
Stability of canonical forms