What are the possible products in allylic bromination of 3-methylcyclopentene?

In some other reactions such as elimination, there is a tendency to form the most substituted double bond, since it is the most stable. If that were the case, then the products should be A, E, F, and G, since these are all trisubstituted alkenes (the others are disubstituted). Is that a valid consideration here, or is there a different overriding rule?

Your comment shows that you are on the right track.

You have chosen A and C because they are formed when the initial allylic radical instantaneously reacts with $\ce{Br2}$ in the propagation step of the reaction, isn't it? (Hint: Just say YES!)

Now give the allylic radicals corresponding to A and C a bit of time, just enough to flip the dot.

How do these other radicals look like? There you have the other two products.

For an extra point: Which isomer of methylcyclopentene could lead to G?

Neither of that is the case here. The double bond is constrained by its initial position, and cannot jump around all that much. In theory, there are $ 2 \times 2 = 4$ possible products (A, C, D, and F) because:

The mechanistic possibilities are drawn out fully below: 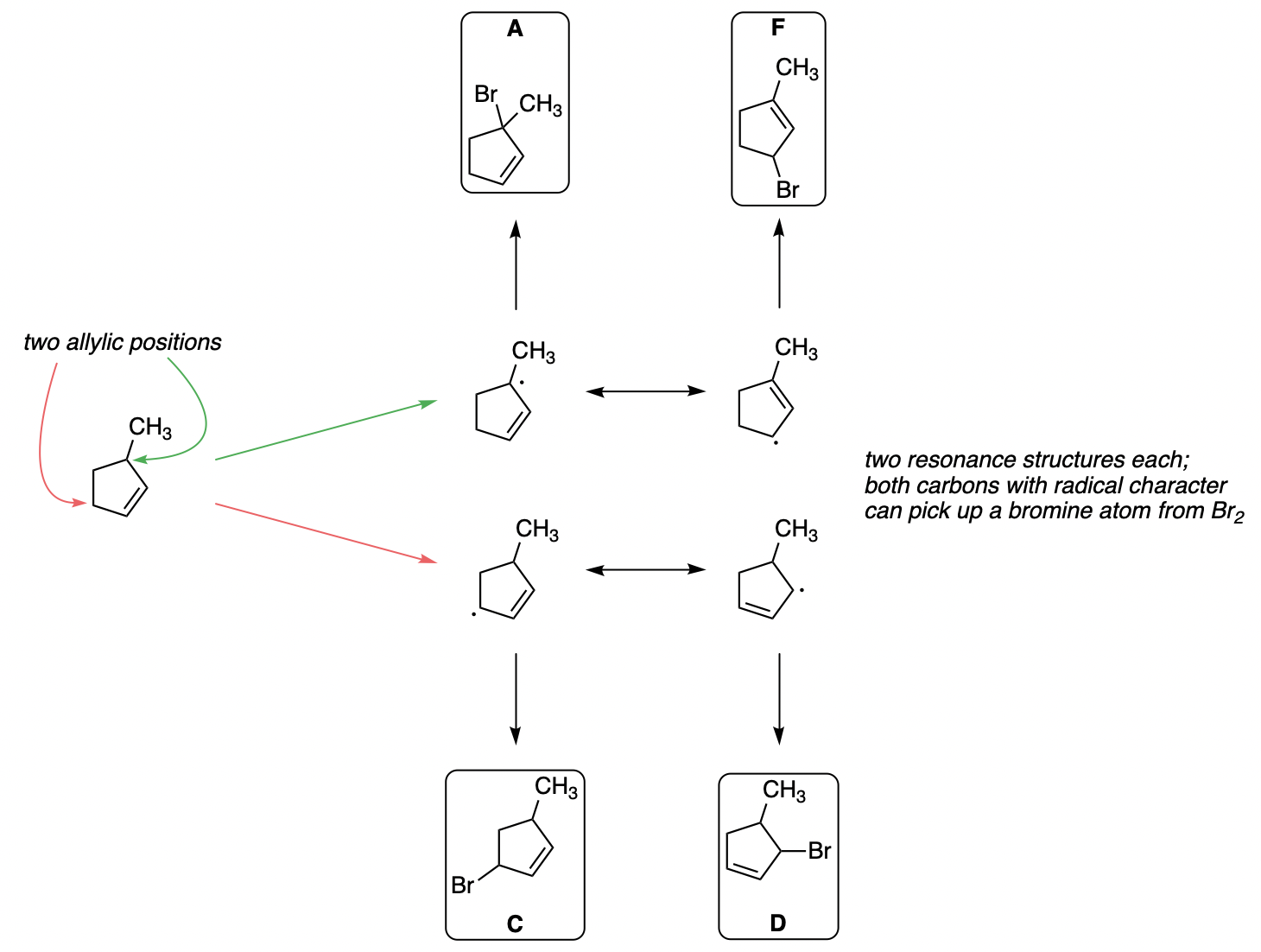 In practice, there would likely be one product that is preferred over the others. Note the use of resonance arrows, $\ce{<->}$: these are not flipping about between the two different resonance structures. Rather, the reality is that the allylic radical is somewhere in-between the two extremes. We only draw out the two extremes here because it's a convenient way of looking at its reactivity (which is sort of a mixture of both extremes).

Not the answer you're looking for? Browse other questions tagged organic-chemistry isomers radicals or ask your own question.

4
Allylic Radicals Bromination Mechanism
1
Alllylic bromination of 1-butene
24
Comparing the stabilities of allylic, benzylic, and tertiary radicals
2
What is the stereochemistry resulting from hydroboration of 1-methylcyclopentene?
5
Products of radical bromination and mechanism
22
Stability of alkenes tri>di>mono, but how to explain tetra
0
Monochlorination of 2-chloropentane and possible enantiomer products