Why is absorbance spectrum continuous and not quantized?

1) In text books, the absorption event is usually described by a figure shown below1: light excites electrons to higher states in atom or molecule. The difference between the ground state and the excited one matches the energy of the absorbed light. But electron states in atoms and molecules should be quantized, so why do we observe absorbance spectra that are smooth and continuous but not spiked and quantized? 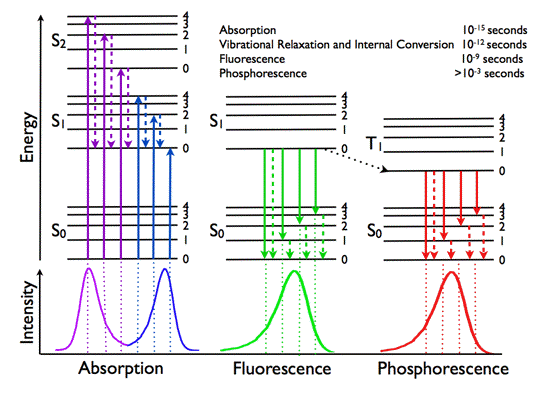 2) Where does the energy go when the excited electron returns to its normal state? In fluorescence, the electrons return to lower states and excite light at higher wavelength than the absorbed one. But if I had a molecule that did not exhibit fluorescence, just plain absorption, does the molecule emit light at the same wavelength it absorbed or does the energy turn to heat? I mean, the electron cannot be excited forever.

3) What is the physical phenomenon behind absorption coefficient? I have been thinking that it has something to do with the lifetime of the excited state – shorter lifetimes increase the probability of a photon to be absorbed, resulting in larger coefficients. Am I completely wrong?

The image shows the absorption and emission spektra of molecules. For isolated atoms, you would indeed observe sharp lines. Think in the Fraunhofer lines.

In the case of molecules, absorption occurs from the vibrationally relaxed electronic ground state ($S_0$) to various vibration levels of the electronically excited $S_1$ state. This results in a broad absorption band instead of a sharp line.

The manifold of $S_1$ with different vibrational levels does not live forever. Within the shortest time, relaxation to the vibrational ground state of $S_1$ occurs. The electron distribution of the excited state is typically significantly different from the $S_0$ state. This results in a completely changed reactivity.

If you don't observe emission from an $S_1$ or $T_1$ state, the excited state is deactivated by internal conversion, i.e. by vibrational exchange with the bulk (solvent).

The pictures you show are misleading as they refer only to molecules in the condensed phase. Isolated molecules in the vapour phase do have discrete (quantised) electronic, vibrational and rotational levels that can easily be measured, and have been so for at least 50 years.

In the condensed phase the spectral lines are inhomogeneously broadened, this means that what you observe is a mixture of many superimposed transitions making a broad structureless feature. This occurs because molecules suffer random collisions/interactions with solvent molecules that shifts energy levels up and down just a little. There are so many different ways this happens that the individual (narrow) spectral line become overlapped and the measured spectrum becomes broad.

We know this because if you freeze a solution close to zero K and illuminate it with a very narrow wavelength laser it is possible to 'burn away' some of the molecules and leave a hole in the spectrum. This is seen as a narrow dip in the spectrum. The hole itself has a width due to the intrinsic lifetime of (say) the excited vibrational transition.

To answer your other points, fluorescence is emitted and either escapes completely into space or is absorbed by some other molecule. The molecule after fluorescing is often left with some vibrational energy in its ground state, this equilibrates with its surroundings as heat. If a triplet is formed, then phosphorescence can be emitted and so on as for fluorescence. If internal conversion (S1 to S0 radiationless transition), all the electronic energy appears as vibrational energy ( a very 'hot' ground state) and then equilibrates with surroundings.

Thank you all for participating. So, the smoothness arises from mainly two factors: 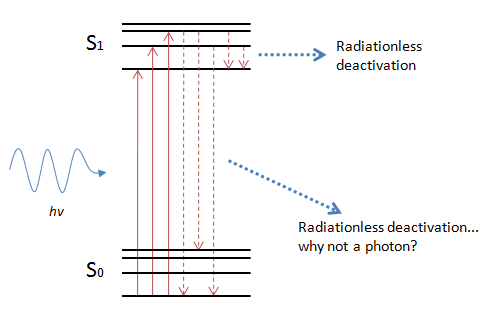 To answer your last question molecules absorb into electronic levels and each of these has vibrational and rotational energy levels. There are a vast number of these,(millions) because vibrations of different frequencies but same symmetry species can combine together. However, it turns out that only a few have a large transition probability for absorption so we often see spectra with a limited number of vibrational lines. In the gas phase we do have the laser technology to quite easily measure the width of any spectral line and this has been done for very many molecules. Look at the benzene vapour spectra for example.

In solution collisions with solvent move energy levels about a bit and this broadens the lines so that they overlap and can never be resolved no matter what the spectral resolution of the laser. The spectrum is inhomogeneously broadened. All that can be done at very low temperature, (close to zero K) is to burn a 'hole' in the spectrum (for example by destroying a group of molecules with that energy) and this hole will last for a short while until inter-molecular interactions 'fill' the hole in again. Obviously the warmer the sample the quicker this happens.

As to your diagram, deactivation the excited state occurs as a competition between photon emission and radiationless precesses. The excited singlet state decays by intersystem crossing to triplet states under the influence of spin-orbit coupling (coupling of electron spin with its orbital angular momentum) and also to the ground state by internal conversion which is primarily cause by anharmonicity. As a vibrationally hot ground state is produced this energy is rapidly lost to the solvent and takes only a few picoseconds to do so and is easily observable in femtosecond laser pump-probe experiments.

Not the answer you're looking for? Browse other questions tagged organic-chemistry analytical-chemistry photochemistry or ask your own question.

4
Why do spectra appear continuous despite their allowed transitions being discrete?

15
What happens to electrons in metal complexes after excitation by visible light?
24
Why does the energy gap for π - π* transitions shrink with the size of the pi-conjugated system?
2
How do flavonoids absorb UV radiation?
3
Clarification on absorption spectra and crystal field theory
3
Charge-transfer absorption complex - solvent sensitivity
14
Are there any (simple) molecules with very different absorption and emission dipole directions?
1
Can the light reaction of photosynthesis happen spontaneous in pools of water?
0
How will the degree of conjugation effect the light emitted? (glow stick reaction)
2
Heat of reaction for the decomposition of AgCl means?
3
Does an electron's spin change when being excited?