I noticed while heating some PbI2 powder that it reversibly changes from a yellow to a dark red. However, I was unable to find anything on this thermochromism.

There are related cases in TlI and AgI but there it is mostly about occupying the free sites in the crystal structure or if Ag is present there is also the possibility of Ag coming close to Ag (so-called argentophilia). This, however, doesn't seem to be the case for Pb(II).

The structure is also different forming layers. I read they have weak VdW-bonds so perhaps those break in the process of heating it? If impurities are introduced there is the possibility of forming a perovskite structure but I doubt this would be reversible. So this has to be a smaller shift in the structure.

PbI2 has quite many different room temperature and high-temperature polytypes, so perhaps it's really a change in the crystal structure? I couldn't really find much on this because I don't know how the colors change for the different polytypes.

Does anyone have an idea what might be the dominating effect for a reformation in the structure, like an actual effect that might take place here?

You see often it is the case in these solid-state thermochromic compounds, that the high-temperature form seems to be the best situation, but cooling it down allows weaker forces like this argentophilia, for example, to distort the structure a bit. Like TlI is more or less an orthorhombically distorted NaCl in its low-temperature form.

Given the fact however that Pb(II) still has a lone-pair that can be positioned quite well in the gap between the layers I don't see a real demand for any change at all.

So the most dominant thermal change, and we are talking here about annealing single crystals for several days to around 150°C seems to be a polytypic change from the 2H-Type to the 12R-Type. Or, as there are several hexagonal and rhomboedric phases let's just assume a change from H to R. You may know polymorphs, like allotropes for example, diamond vs graphite or different phosphorus allotropes. And polytypes are structures that usually appear in layers where the overall composition and connections are pretty much the same but the stacking order of the layer is different. I found a sketch how the layers have to change: 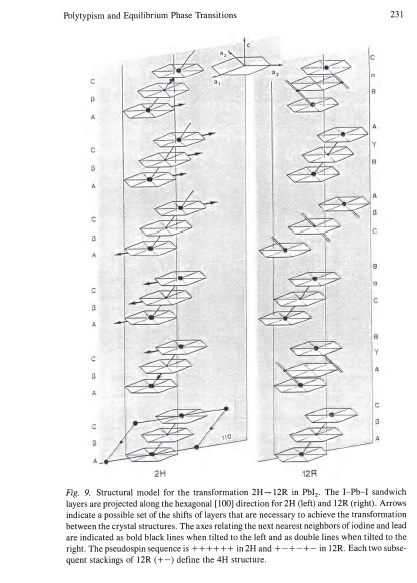 It was often reported that the change from H to R seems to be thermally while the change from R to H takes a long time. As the crystals were grown from sodium based gels traces of sodium could be found and the higher the sodium content the easier and faster they turned back to H. I didn't grow any crystals but precipitated it using NaI, so I probably have a high sodium content which acts as an impurity to fastly change the structure back, which appeared to me as being reversibly thermochromic.

I don't know whether this also causes the color change but many other color changes, like in TlI depend on minor distortions in the crystal structure as well so it could be plausible.

Not the answer you're looking for? Browse other questions tagged temperature solid-state-chemistry or ask your own question.

2
Salts of hydronium ion
3
Rock salt structure: chloride lattice or sodium lattice?
6
Super-cooled liquids
3
Why some compounds form different crystal structure at different temperature?
2
Stability of CN molecule
7
Why does heating transform the aquacomples of slightly acidified cobalt(II) chloride solution to the chlorido complex?
1
Why are calorimeters often made of materials with low specific heats?