Why are the t2 orbitals above the e orbitals in a tetrahedral complex using the crystal field theory?

In case of octahedral coordination entity formation, the $\mathrm{e_g}$ is above in energy level diagram than the $\mathrm{t_{2g}}$ due to more electrostatic force acting when the orbitals are along the axes in case of $\mathrm d_{z^2}$ etc. But in case of tetrahedral, why is the energy diagram inverted and becomes somewhat like this? I can't think of any possible reason. Can anyone please help? 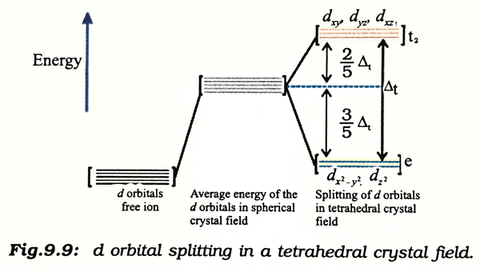 In crystal field theory, we look only at the electrostatic effect of a certain distribution of charges around the nucleus on the orbitals; the discussion is primarily qualitative and geometric in nature.

In an environment with spheric symmetry (such as an isolated atom), all 5 d-orbitals are degenerate; since electrostatics are the same in any radial direction, and the set of 5 d-orbitals are only distinguished by their angular part (how are they distributed in the solid angle around the nucleus), they are equivalent. [Incidentally, this would be true not only for an isolated atom but also for an atom surrounded by a spherically symmetric charge distribution, such as a uniform charge distribution a certain distance away from the nucleus; however, I can't think of a real system that would have exact spherical symmetry.]

In the extreme case where the distribution of point charges around the atom has no symmetry, all five d-orbitals would in general have different energies, because their interactions with the charges would be different; but if our distribution of charges is symmetric (as happens in both the octahedral and the tetrahedral case), we need to look at how the orbitals behave under the symmetry.

If you do that (and Jan's excellent answer explains what happens with the Cartesian axes under both symmetries), you will see that in the octahedral case two orbitals behave the same way (and are destabilised to the same extent), while another set of three orbitals behave equally (and are stabilised to the same extent). Looking further at their symmetry properties, these sets of two and three orbitals behave in the ways we describe with $\mathrm{e_g}$ and $\mathrm{t_{2g}}$, respectively. In the tetrahedral case, per contrast, we find that two orbitals are equally stabilised while three orbitals are equally destabilised; the symmetry label that fits their behaviour is $\mathrm e$ and $\mathrm t_2$. [In both cases, $\mathrm e$/$\mathrm{e_g}$ is a symmetry label that corresponds to two elements, and $\mathrm t_2$/$\mathrm{t_{2g}}$ corresponds to three.] These "blocs" of orbitals are degenerate (i.e. these two or three orbitals all have the same energy because they interact similarly with the point charges in the environment), while the energy of these blocs is not the same - that's what we call "splitting".

Note that the temptation to think that there are two "$\mathrm e$" d-orbitals and three "$\mathrm t_2$" d-orbitals in an atom is to be avoided: there is nothing intrinsic in the orbitals that produces this particular splitting into two blocs; rather, it's a product of the symmetry of the environment. The same 5 orbitals, if put in a square planar environment, do not form blocs of 2 and 3 orbitals, but 2, 1, 1 and 1; in a trigonal bipyramidal environment, they split into 2, 2, and 1; and so on.

[As a thought exercise: in crystal field theory, we assume that we are dealing with a central cation surrounded by anions, because that's the problem for which CFT was developed. But, what would happen if the point charges around the atoms were positive instead of negative? You'll find that you end up with stabilised $\mathrm{e_g}$ (octahedral) and $\mathrm t_2$ (tetrahedral) and destabilised $\mathrm{t_{2g}}$ (octahedral) and $\mathrm e$ (tetrahedral), exactly the opposite splitting but the same symmetry behaviour.]

There are rigorous mathematical ways to deduce the symmetry labels of d-orbitals (or any orbital, for that matter) under an environment of a certain symmetry, as provided by point group theory, which involve symmetry tables and so on. Most likely, your textbook will include a discussion of the derivation for at least the octahedral case.

It is important to start off the answer that what you are talking about is only the very basic crystal field theory. In this, the ligands are assumed to be point-shaped negative charges approaching the central metal from specific directions that correspond to the complex’ symmetry. These negative charges then lead to the destabilisation of orbitals that are pointing towards these charges by electrostatic repulsion.

For an octahedral complex, the ligands approach along the coordinate axes in both positive and negative directions. Therefore, all orbitals that have contributions along these axes will be destabilised. This includes the $\mathrm d_{x^2-y^2}$ orbital ($x$ and $y$ axes) and the $\mathrm d_{z^2}$ orbital (the $z$ axis).

In a tetrahedral complex, the ligands approach from four of the eight corners of a cube whose sides are parallel with the coordinate axes. Without loss of generalisation, we can define one ligand to arrive from $(+x,+y,+z)$, one from $(-x,-y,+z)$, one from $(+x,-y,-z)$ and the final one from $(-x,+y,-z)$. As you may already notice, all of these approach from between coordinate axes. This is almost precisely where the $\mathrm{t_2}$ orbitals ($\mathrm d_{xy}, \mathrm d_{xz}$ and $\mathrm d_{yz}$) have their greatest extent. Therefore, it is these orbitals that are destabilised rather than the ones pointing along the axes (which here corresponds to between the ligands).

As the approach of tetrahedral ligands still somewhat ‘misses’ the orbitals in question, the destabilisation is less than in the octahedral case.

For any more in-depth discussion, typically one has to expand the crystal field model and discuss in terms of molecular orbitals.

7
Energy of orbitals under a crystal field
21
Why is manganese(II) coloured although the transition should be spin-forbidden?
4
Why do ligands approach along the axes?
17
Where does the label ‘Dq’ to denote the field split in coordination compounds come from?
3
Deriving the irreps of the d-orbitals under C3 and S6 operations in octahedral symmetry
5
What is the cause for Crystal Field Splitting Parameter?