Spontaneous combustion of sulfur in a steel barrel

Got some free sulfur. Went to the site, and they put a pallet with 3 barrels on it. One of the barrels was badly corroded, but looked like I could get it home. I had plastic barrels at home that I could transfer the material to.

About 10 km from home I noticed I was leaving a trail of smoke. Got in back with a shovel, and found that I had spots of burning sulfur. I smothered as best I could, got home, and spent the next two hours unloading and putting out blobs of burning sulfur. Did a number on my truck box lining in a few spots.

The lids continued to smoke -- it was a very slow motion fire, with some form of corrosion that would burn across the surface at around an inch an hour.

The bulk of the sulfur was unchanged by all this, and I was able to get it into plastic pails and barrels with no problem.

all the barrels had been stored outside, and in the non-corroded barrel had standing water on top of the sulfur. 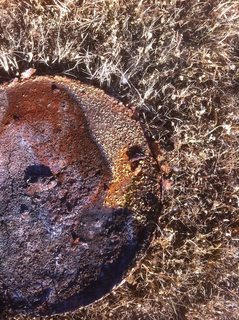 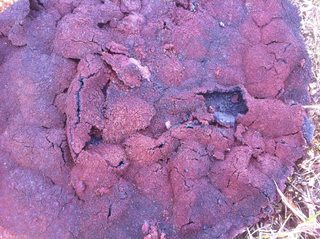 Iron sulfide FeS is pyrophoric: flammable, and while it can start just on exposure to air, the presence of UV light will help. As is usual, one of the key components is the surface to volume ratio. A massive lump is unlikely to catch fire. A crusty scale of FeS, such as forms in tanks used to store sour oil (H2S content) is more likely to combust when air is let into the tank.

From the descriptions in the abstract above, I suspect that I had one of the other iron sulfides. Whatever I had did not burn fast.