Can you calculate the energy needed to ionize an electron in hydrogen? [closed]

If I have an electron in the 2s orbital,it would have different energy with the 2p orbital.Can we calculate the difference in the energy ?

Because the single electron in the hydrogen atom feels a purely symmetric Coulomb potential, the states with different orbital angular momentum $\ell$ are degenerate in non-relativistic quantum mechanics and the binding energy of the electron is given by

When Dirac introduced his relativistic theory for one-electron systems it was shown that the spin-orbit coupling in the hydrogen atom results in a splitting between the 2P$_{3/2}$ level on one hand and the 2S$_{1/2}$ and 2P$_{1/2}$ levels on the other hand (the latter two are degenerate). The subscript number indicates the total angular momentum $J=S+L$.

Later, Willis Lamb was able to measure a shift between the 2S$_{1/2}$ and 2P$_{1/2}$ levels that was not predicted by Dirac's theory and this splitting was explained by Hans Bethe (traveling back by train from the conference where he learned about Lamb's results) and marked the birth of quantum electrodynamics (QED). 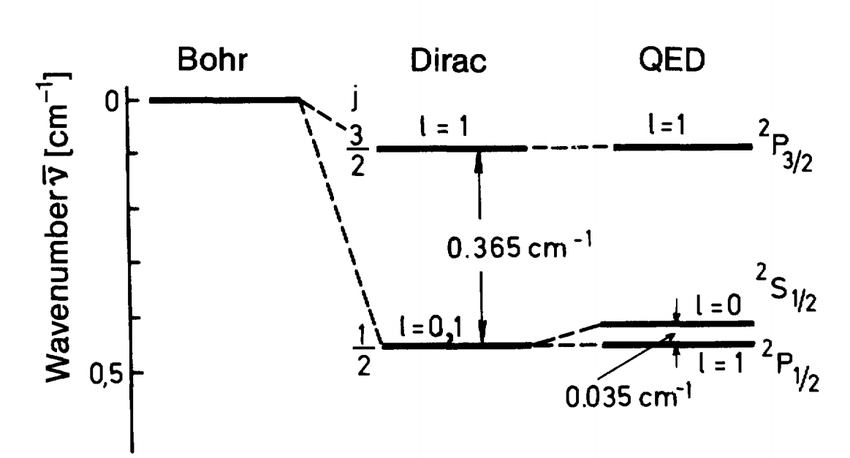 Effect of Dirac theory and QED on the non-relativistic energy of 2S and 2P levels of atomic hydrogen (taken from H. C. Wolf H. Haken, The physics of atoms and quanta, 7 ed., Springer, 2005.).

To come back to your question, yes, it is possible to calculate the splitting between the electronic states of atomic hydrogen, however, it requires some advanced maths. If you are really interested in calculating it yourself, I recommend Quantum Mechanics of One- and Two-Electron Atoms by Bethe and Salperer.

2
Calculating the ionization energy for hydrogen

33
Is there an energy cost associated with flipping the spin of an electron?
3
How to calculate the energy to dissociate a bond into neutral atoms?
0
Energy of the Orbital versus Energy of the Electron
11
Why is a third body needed in the recombination of two hydrogen atoms?
2
Why do Rydberg atoms have electrons that can transition above the first ionization energy?