Draw the molecular structures of 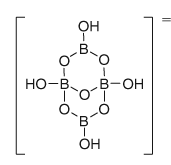 I would just like some clarification on the coordination numbers of the $\ce{O}$ atoms in both anions and to see if my hybridisation schemes are correct.

Browse other questions tagged inorganic-chemistry hybridization or ask your own question.