Platinum Orbitals in Cisplatin Forming Bonds with LCAOs of Chlorine

My inorganic chemistry professor placed two questions on the exam review that he did not cover in class; I haven't been able to figure out how to answer them and could really use some help in learning how to think about this problem.

The two questions are:

How do I arrive at the corresponding oritals?

I figured it out!

We have to start by looking at d orbital shapes:

To form bonds, the d orbitals of platinum must have the same symmetry (i.e. shape) as the molecular orbital that's approximated by the LCAO.

We start with the bonding orbital, which looks like this: (sorry about the pencil-and-paper phone picture). 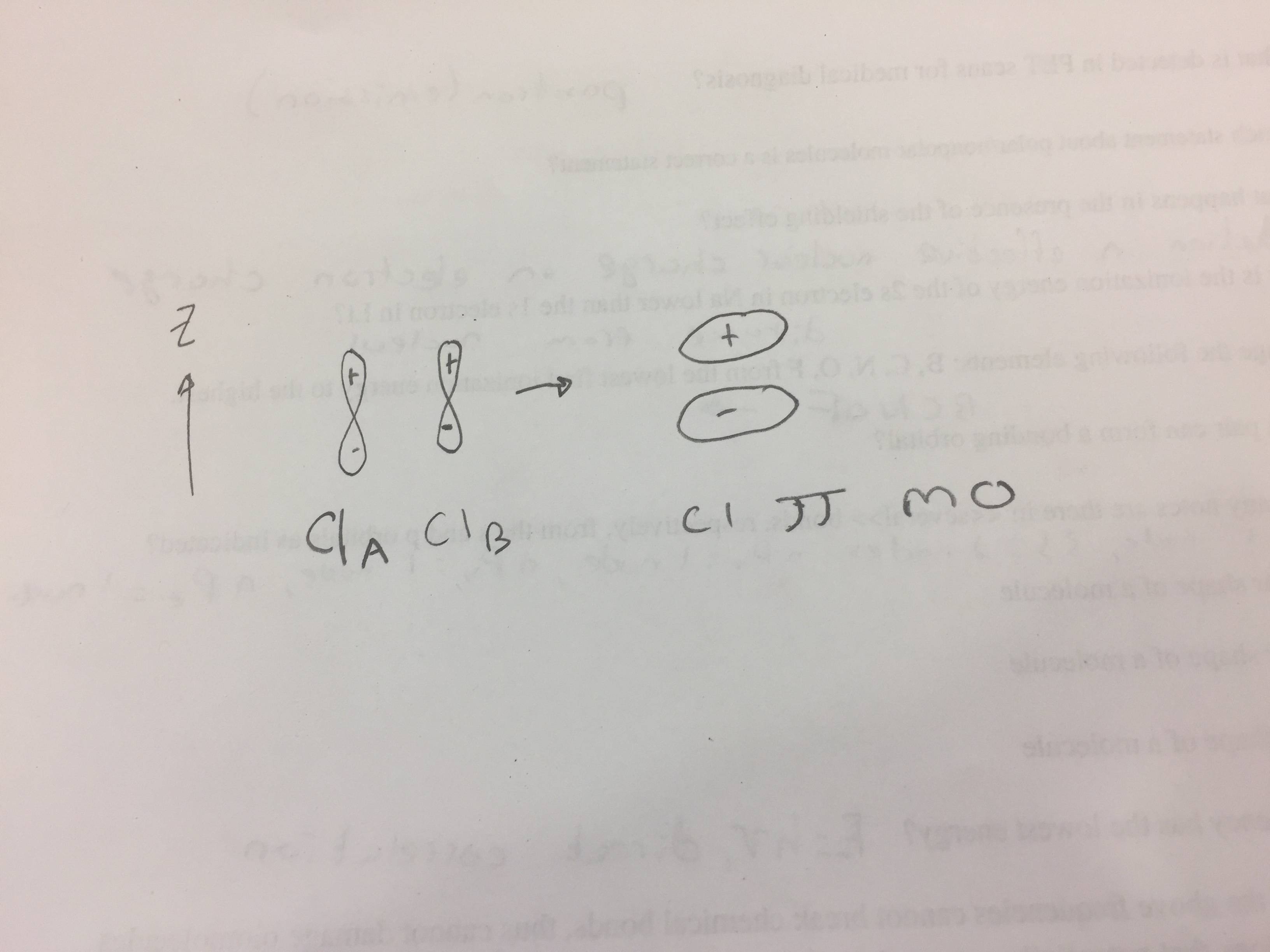 We can see we need a d orbital with exactly one lobe in the zx plane (x is pointing to the right in the above). The only d orbital that fits the requirement is the $\textrm{dz}^{2}$.

Moving on to the anti-bonding orbital, which I can't post because I don't have at least 10 reputation, we see that it has four lobes with two nodal planes. It looks like a $\textrm{d}_{xz}$ orbital, in fact.

We can see we need a d orbital in the zx plane that has two lobes. Clearly, this is the $\textrm{d}_{xz}$ orbital.

Easier than I thought once I got the concepts down!

It is important to first take a look at your coordinate system. Cisplatin is a square planar complex. In these types of complexes the principal axis ($z$ axis) is defined as the one out of the ligand plane. Without loss of generality I will assume that one chlorine is in positive $x$ direction and the other in positive $y$ direction. Since we are dealing with a complex whose shape derives from the octahedron, ligands will approach along the coordinate axes, not between them.

Next you should consider which type of symmetry your chlorine group orbitals have. As I already mentioned, the $z$ axis is perpendicular to both $\ce{Pt-Cl}$ bonds. Therefore, the $\mathrm p_z$ orbitals of chlorine will have a nodal plane that completely contains the bond axes.

This immediately answers our question 1: there is no orbital on platinum that can form a σ bond with the chlorine group orbital because σ bonds cannot have a nodal plane along the bond axis.

In an extension to the question, I want to consider which platinum orbitals can form bonds of any kind with this $\Psi_1$.

In the positive part of the coordinate system, we can only have a single nodal plane in the $xy$ plane. This points us towards the $\mathrm d_{xz}$ and $\mathrm d_{yz}$ orbitals — but each of these would only be π symmetric towards one chlorine atom and δ-symmetric towards the other which means effectively nonbonding. We can, however, form a linear combination of the two $\Phi_1 = \phi(\mathrm d_{xz}) + \phi(\mathrm d_{yz})$ which would point between the $x$ and $y$ coordinate axes and be able to build up a π-symmetric bond.

Of course, the $\mathrm p_z$ orbital of platinum is another trivial (and much more likely) answer. These two are shown in figure 1. 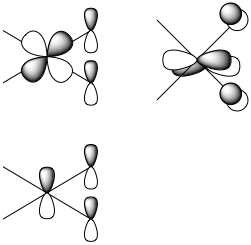 Now let’s move on to $\Psi_2$. This not only has the (π-symmetry invoking) nodal plane containing the bond axes that the previous group orbital had; it also has a second nodal plane through the plane of symmetry, bisecting the platinum atom. This may initially seem like an ideal case for a $\mathrm d$ orbital but alas, the $\mathrm d$ orbitals are pointing in the wrong direction. We need to form the opposite linear combination of above, $\Phi_2 = \phi(\mathrm d_{xz}) - \phi(\mathrm d_{yz})$ which would have the correct orientation as shown in figure 2 below.

Not the answer you're looking for? Browse other questions tagged inorganic-chemistry bond molecular-orbital-theory orbitals or ask your own question.

20
How can the Bonding in IF7 be explained using LCAO method?
3
Draw a simplified MO diagram for the pi system of Methyl vinyl ether
22
What is Drago's rule? Does it really exist?
14
Help with derivation on why antibonding orbitals are more antibonding
2
Forming the resonance structures for the nitrite anion
9
How is Bent's rule consistent with LCAO MO theory?