I went through the problems on the pictures: 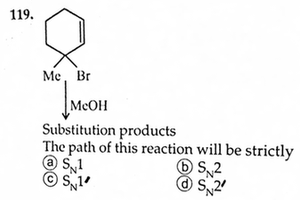 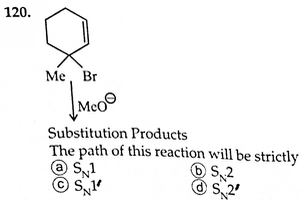 Also, how does the answer change by changing the nucleophile? 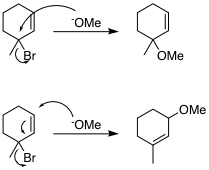 The same logic can be applied to $\mathrm{S_N1'}$: here, the intermediate carbocation is not a localised one but an allyl cation.

The primed versions here are observed because not only the bimolecular attack on the highly substituted tertiary carbon ($\mathrm{S_N2}$) is unlikely — this carbon is tertiary which usually already implies no $\mathrm{S_N2}$ — but also the capturing of the carbocation under $\mathrm{S_N1}$ conditions is more likely to happen at the sterically much less hindered carbon atom.

Not the answer you're looking for? Browse other questions tagged organic-chemistry reaction-mechanism notation or ask your own question.

3
Why does carbocation stability increase in the order 1°, 2°, 3°?
2
SN1 or SN2, the kinetic isotope effect
7
Why does the opening of an epoxide occur via an Sn2 like mechanism when using a methanoate ion as a nucleophile and methanol as a solvent?
3
What is the nucleophile in alkaline hydrolysis of a haloalkane?
3
How to decide between different possible substitution/elimination mechanisms under given conditions?
3
Deciding E1/E2/SN1/SN2 for cyanide ion
10
How does ring size affect SN2 reactions?
3
Can Ethanol be used to carry out SN1 reaction?