Why is phenolphthalein at pH 10 non-planar?

Why does the ring bearing the carboxylate (COO-) group not lying on the same plane as the other 2 rings? 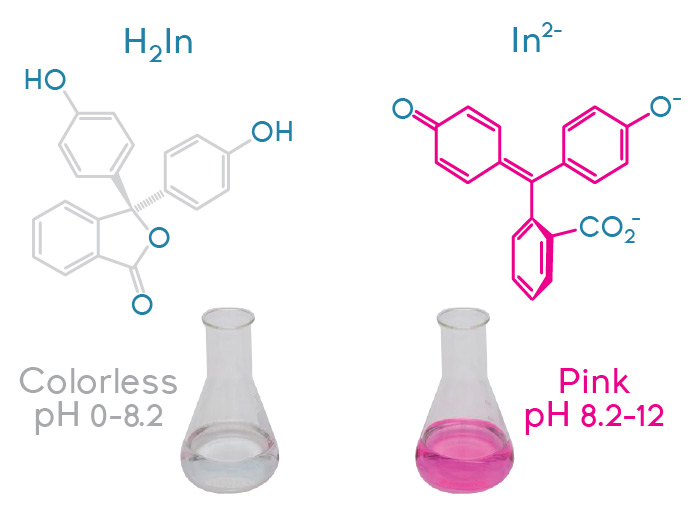 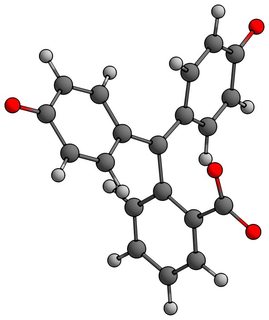 So what do we see here? Actually no two rings are in one plane, but two are nearly planar (~40° of twist) while one is basically at 90° twist. Let's first look at the one with the carboxy group which is twisted a lot. The carboxy group is in ortho position. If we twist the ring to be in a plane with one of the other rings the oxygen would collide with a CH group. The carbons and oxygens are quite big, so is the repulsion between them and the angle has to be quite big for it to work out. Here's a picture of those groups colliding (I did put it at some degree angle because it's easier to see), keep in mind that this representation of atoms is not the truth. The electron "cloud" around them is actually much larger. 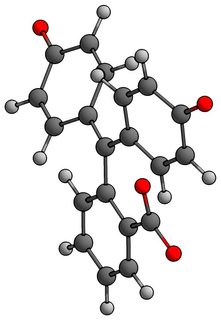 Now why do the other two rings have an angle of about 40° between them? If they are planar they can have conjugation which is favorable. Now What happens if we put them into one plane? 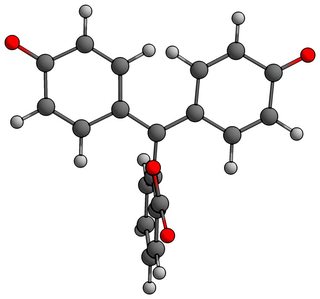 You can see that the two hydrogens in the top get very close. In fact, too close. So there are two ways to avoid this. Twist the two rings or make the angle around the central carbon atom between the rings bigger. In a sp2 carbon like we got here the optimal value would be 120°, we could make it bigger, let's say 145 degree: 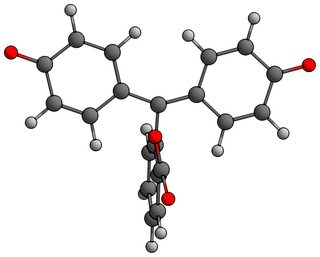 Now the hydrogens would not clash any more, but it turns out this costs much more energy than we would lose if we twist the two rings to avoid the hydrogens clashing together. What happens in the end is that this angle gets a little bit bigger (~124° instead of 120) and we get that twist between the aromatic rings which is still low enough for good conjugation between them (see first structure).

Not the answer you're looking for? Browse other questions tagged organic-chemistry stereochemistry molecular-structure or ask your own question.

23
Non-zero dipole moment of hydroquinone
1
Stereogenic C and enantiomers
9
Why are carbons of Inositol chiral centers?
3
Why does phenolphthalein form in this reaction?
2
Is it correct to look at plane of symmetry in substituted cyclohexane for determining a meso compound?