To understand logic and relation of biochemical cycles [closed]

I recenty learned the Kreb cycle, in that I saw many chemical are same.

I want to know if there is logic/threrom/technique in which I can write a chemical cycle to get a product i.e I want basic reactions and how to put it in sequence to make a cycle ?

tl;dr: You can't reasonably 'propose' a biochemical pathway on paper the same way you might be able to for an organic reaction.

Biochemical pathways are highly complex and interwoven. The Krebs cycle doesn't act in isolation, but rather is part of a far larger network which provides it with the components it needs (enzymes, cofactors, oxidatants/reductants etc.) and the regulation required to ensure it works correctly.

The figure below demonstrates a more elaborated Krebs cycle, complete with all of the relevant interactions with various other pathways:[1] 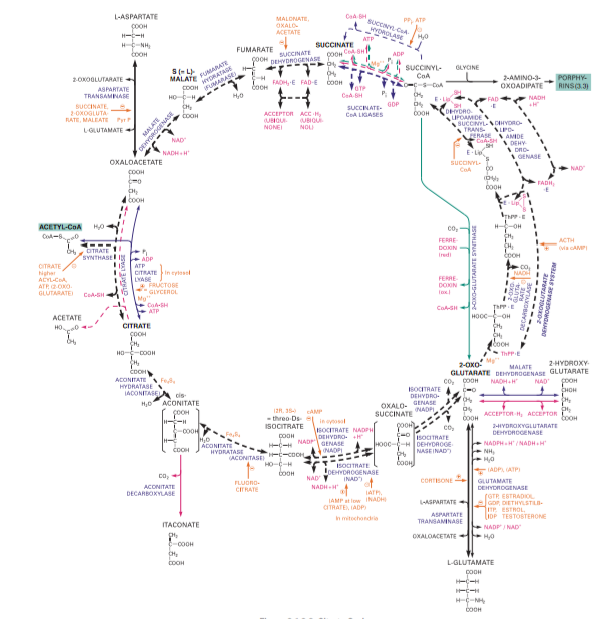 Given their complexity, the discovery of the true nature of a pathway takes a long time, and uncertainty often remains due to the difficulty in directly observing the reactions taking place (though with modern genomics/sequencing its becoming easier to see what might be taking place).

In the case of the Krebs cycle, the key discovery was made by Gyorgyi who won the 1937 Nobel Prize in Physiology for 'his discoveries in connection with the biological combustion processes, with special reference to vitamin C and the catalysis of fumaric acid'.

Using isolated cells from pigeon breast tissue, Gyorgyi was able to identify the importance of succinic acid and fumaric acid in the pathway, noting that the rate of respiration was increased significantly if the tissue was incubated in their presence (as measured by gas evolution, which was already known at the time to be a consequence of respiration).

Building on this discovery, Krebs published the first full account of cellular respiration in his 1937 paper Metabolism of Ketonic acids in animal tissues.[2] In this paper he outlines all of the key steps needed, but even at this stage many of the important details were missing (many of the other necessary pathways weren't known, so Krebs had no idea where the succinate was coming from in the body, for example).

4
Which chemical reactions occur between my tongue and the food I eat?
1
Determination of a chemical compound in a non-homogeneous sample
15
Is it possible to make a drug that liquefies heart plaque to treat heart disease?
2
Confusion about PCR
21
Why do some chemical reactions require many steps?
1
DNA dye: Are there any natural dye for DNA (instead of artificial ones)?