Mechanism of a gold catalyzed addition to triple bond

I needed to draw the reaction mechanism for this reaction:

So, after consulting some literature I drew this mechanism: 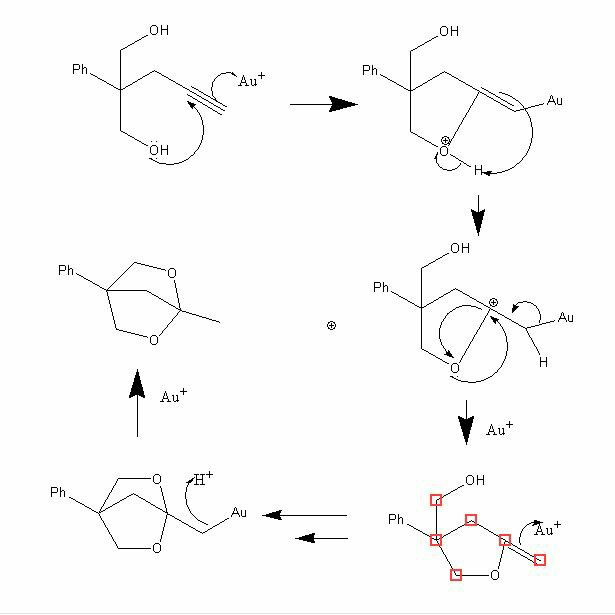 Or, something else happens in the last step?

In their 2005 The Journal of the American Chemical Society publication, Genêt, et al. have reported a gold-promoted cyclization reaction of bis-homopropagylic diols (see Graphical Abstract below), which afforded bicyclic ketals at room temperature in very good to excellent yields (ref. 1). This cycloisomerization reaction was catalyzed by either Au(I) or Au(II) chloride in methanol:

Abstract: A highly efficient gold-catalyzed cycloisomerization reaction of bis-homopropargylic diols is described. The cyclizations are conducted in the presence of either $\ce{Au^I}$ or $\ce{Au^{II}}$ catalysts in $\ce{MeOH}$ at room temperature in a very short time. The reaction conditions are compatible with functional groups, such as n-butyl, phenyl, allyl, benzyl, and alcohol groups, leading to original strained dioxabicyclo[2.2.1], -[2.2.2], or -[3.2.1] ketals in good to excellent yields.

There was a sequence of compounds has been used as starting material, which consist of different R- groups, one of them been Ph- and $n = n' = 1$ as in this example. A plausible mechanism for the cyclization is given in the paper, which is shown in following scheme: 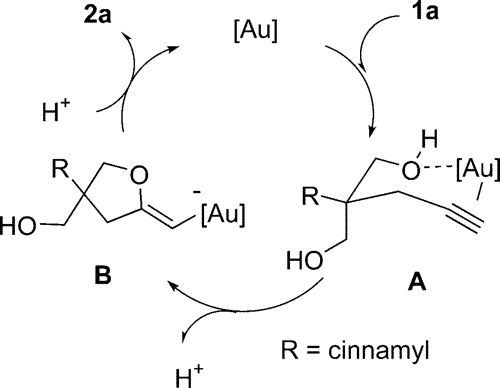 In there, 1a and 2a represent the appropriate structures with $n = n' = 1$ and R- = cinnamyl- group. The authors have given the following explanation for the mechanism:

The reaction may be initiated by the formation of the π-alkynyl complex A through the complexation of the unsaturated triple bond to the $\ce{Au}$ catalyst. The coordination of the triple bond, therefore, enhances the electrophilicity of the alkyne as usually advocated for metal-catalyzed reactions of alkynes (ref. 2). The addition of one alcohol may be favored by an intramolecular complexation of the $\ce{OH}$ group to the gold catalyst, as already envisaged by Teles and co-workers (ref. 3) for the addition of methanol to alkynes. The enol vinylgold intermediate B may then be protonolyzed leading to an enol ether, which then undergoes another intramolecular addition of the remaining alcohol leading to the cyclic ketal 2a. This latter step may also be catalyzed by gold, considering the proposed mechanism for the $\ce{Au(II)}$-catalyzed cyclization of α-hydroxyallenes (ref. 4).

In reference 2, it is stated that that the activation of the carbon−carbon triple bond toward nucleophilic attack can be performed by metals with high Lewis acidity (alkyne activation), as illustrated in Equation 1 of the following scheme. It is also easy to realize that an external nucleophile could make an anti-addition as a result and thus, the product should be obtained with trans-stereochemistry (Equation 1). Yet, as envisioned by Teles and co-workers (ref. 3), syn-addition is also possible by an external nucleophile, through complexation with metal, first by alkyne and then by the external nucleophile (see Last Scheme below). However, in many other cases (specifically where a nucleophile would be available intramolecularly as the case in here) the picture is quite different (Equation 2). Here, metal can activate the nucleophile first (nucleophile activation) and the reactions may proceed as a result of the insertion of the alkyne moiety into M−H or M−Nu bonds of “H−M−Nu” complexes, typically with syn-addition as illustrated in Equation 2 of the scheme (This is the case illustrated in A and B). 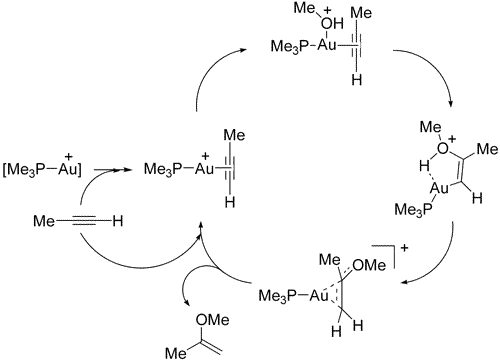 3
Mono-addition of HCl to unsymmetrical dienes?
5
Coconut aldehyde mechanism
4
Mechanism of Friedel-Crafts acylation with succinic anhydride
0
2 problems with elimination-addition of halobenzene using NH2-
1
How to draw a reaction coordinate diagram for SN1 mechanism?
2
Mechanism of acid-catalyzed Robinson annulation?
2
Equilibrium with an E2 step