Qualitative explanation of how COSY works

I think I understand 1D Proton NMR with the Fourier Transform, qualitatively. However, I am struggling to understand 2D COSY NMR.

I am stuck on a few things;

So my first question is - in 2D COSY NMR, are both "pulses" the same? i.e., do we subject the sample to a "noise" pulse, then a delay, and then a second "noise" pulse, and then measure the FID?

I think we do, because as far as I have read, the only thing we are varying in the second dimension in the experiment is the length of the delay between pulses.

How, then, does varying the delay time lead to the discovery of "correlation" between protons? What is it about applying a second pulse to partially relaxed protons, and then measuring the FID, that leads us to discover how the protons are correlated, and to the presence or absence of cross-peaks in our 2D spectrum?

If anyone has a link that explains this, that would be fine. All my searches on the Internet so far just talk about how to interpret the COSY spectrum, with nothing about how/why it actually works.

In the 1D-proton experiment a hard 90° pulse is applied to the sample before the FID is acquired over some time, t. This set of events is known as the ‘pulse sequence’, and the resulting data is in the time domain, and needs to subjected to a Fourier transform in order to get a 1D spectrum in the frequency domain.

2D experiments are measured much in the same way, except instead of running the pulse sequence once, we run it multiple times, changing some variable and collecting all of the data into one set which will later become the 2D spectrum. [*]

The standard COSY experiment is one of the simplest 2D experiments to understand. It’s pulse sequence differs from the 1D-proton experiment only by an additional hard 90° pulse. We can explain most (though not all) properties of the COSY experiment using a vector model with no mathematics.

Consider a single magnetisation vector, M, which isn't coupled to anything. $\ce{CHCl3}$ would be a good example of this, and leads to a single cross-peak along the diagonal of the resulting COSY spectrum (a trivial result, but easier to explain). 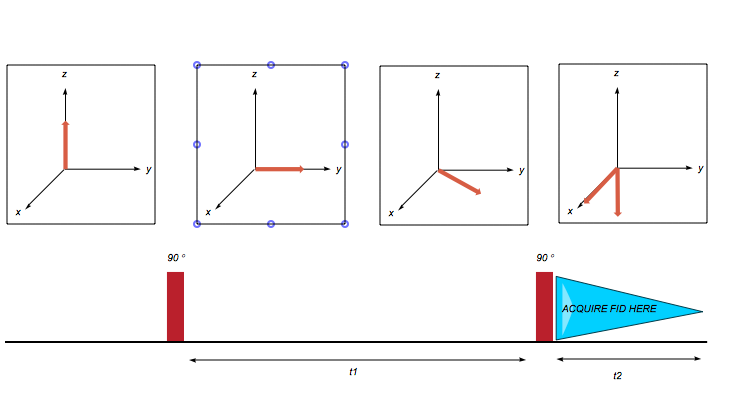 The experiment consists of 4 steps: 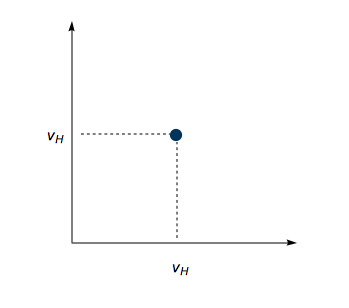 In more complex systems, where multiple protons are present, we observe additional cross peaks in the COSY spectrum off the diagonal corresponding to the coupling between pairs of spins.

The appearance of these additional cross peaks cannot be explained qualitatively using a vector diagram (as per above), but is a consequence of the second 90° pulse that we apply prior to acquisition of the FID.

Where coupling exists, the second 90° pulse doesn't just change the position of the magnetisation vector M, but also causes a population change for the transitions of the spin system through a phenomenon known as coherence transfer.

A bit of pedanticism first. Some of your terminology usage is inaccurate, I'd just like to take the opportunity to clear some of it up.

Many 2D experiments are designed to measure correlations between two nuclear spins, commonly denoted I and S. In the case of COSY both I and S are the same nucleus (typically $\ce{^1H}$, but there are versions with other nuclei). The correlation that is being detected is through-bond coupling.

The pulse sequence of COSY looks easy, but the maths is actually more complicated than it is for something like HSQC. So, if you don't want a mathematical answer, quite a bit of detail has to be omitted. The best non-mathematical way I can explain it is as follows:

From the FID obtained in $t_2$, we know about the resonance frequencies of both spins I and S. So, in the $\omega_2$ dimension we will have two peaks, centred at $\omega_I$ and $\omega_S$.

In the 2D spectrum, then, we will see two peaks. One is centred at $(\omega_I, \omega_I)$, and is known as the diagonal peak. The other one is centred at $(\omega_I, \omega_S)$, and is known as the cross peak. Now, the cross peak only appears if there has been transfer of magnetisation from spin I to spin S, which in turn can only occur if spins I and S have a through-bond coupling.

"But wait! Aren't there peaks at $(\omega_S,\omega_I)$ and $(\omega_S,\omega_S)$?" Yes, absolutely. That's because the first 90° pulse also leads to excitation of spin S; after all, spins I and S are the same nucleus, and an unselective pulse necessarily excites both. In an exactly analogous manner to that described above, this gives rise to the other two peaks (you can just switch the labels I and S in my description to see how this happens).

Finally, to answer some of your questions directly:

Yes, they are exactly the same. (This depends on how advanced an answer you want, though. For the purposes of 2D data processing, e.g. the States method, the phases of the two pulses may be different - i.e. one may be aligned along the x-axis, and the other along the y-axis. But I suppose you can ignore this for now.)

in 2D COSY, during the delay time, the protons are undergoing FID the same as they do in 1D NMR, even if we are not measuring it at this time

As I mentioned above it is free precession and not FID, but yes, this is exactly correct!

How, then, does varying the delay time lead to the discovery of "correlation" between protons?

The thing about varying the delay time, is that we are trying to measure frequencies. These can be either resonance frequencies (i.e. chemical shift), or coupling frequencies (recall that coupling constants are expressed in Hz).

I offer you the analogy of a clock. Let's say you have a clock, and you want to measure the frequency at which the minute hand rotates. If you simply look at the clock for one instant and record the position of the minute hand, you can't tell how fast it is rotating - or whether it is even rotating at all! You need to look at it continuously over a period of time, or you need to look at it at constant intervals and jot down how its position changes with time.

What is it about applying a second pulse to partially relaxed protons, and then measuring the FID, that leads us to discover how the protons are correlated, and to the presence or absence of cross-peaks in our 2D spectrum?

I hope the above discussion was sufficient. And if you want more detail I'm afraid that you need to go into the maths.

Two pulses are applied to your sample, with a distance $\tau$ between them, which gets incremented by $\Delta\tau$ in, lets say, 128 steps, starting at zero, or, more realistically (because you cant apply two pulses at the same time), at $\Delta\tau$.

There is an FID after each first pulse, which is discarded, and one after the second pulse, which gets recorded. In the end, we have 128 FIDs, each with e.g. 512 points.

Now for COSY, it is elementar that the FID is recorded in quadrature (all modern spectrometers do that), where each peak not only has an intensity, but also a phase, or, mathematically equivalent, a complex signal consisting of a "real" and an "imaginary" part. If you look at 1D NMR spectra, you usually only show the "real" part, and you have to phase the spectrum beforehand.

The absolute phase has no real physical meaning, but from a pulse on a totally relaxed sample, the phase of all peaks is (on an ideal spectrometer) the same, and we wilfully shift it to zero and call the real part "absorptive". Every additive part of the signal is a damped cosine, with slightly different frequencies, and so they all start at intensity $1$ x (number of protons)

Now if you apply the (second) pulse to a sample which is already showing an FID, each signal has a different phase, depending on how far the first FID had evolved yet. If you put all the 128 1D spectra behind each other, you see that the absorptive signal of each peak oscillates between full intensity, zero, negative, and back. (The "magnitude" signal of all 128 would look perfectly the same, just getting a bit weaker.)

They oscillate with the same frequency as in the 1D direction, so if you do the 2D FT, you get the diagonal peaks, and the projection in both directions gives you the ordinary 1D spectra.

If the modulation is close to the actual Lamor frequency, btw., you get those $AB$ spin systems. The modulation can now induce transitions, and so the two protons depopulate certain spin states in each other, depending on their own. In the end (no chemical shift difference), you get no visible coupling at all.

12
Why is proton coupling through bonds and how does this affect identical protons?
4
Why only one peak is observed in NMR spectrum of H2?
14
Comparison of COSY and TOCSY for detection of small couplings between protons
6
Slight variation in NMR integrals of CH protons vs. CH2 or CH3
3
NMR sweeping magnetic field
5
How is a NMR spectrum obtained?
8
NMR terminology: "Transients"
3
How can a 90 degree pulse cause precession perpendicular to the applied field in proton NMR