I have seen in two different sources claiming that $\ce{PhCH2CH2F}$ gives styrene $\ce{PhCH=CH2}$ when treated with alcoholic $\ce{KOH}$, but one source suggests an E1cb mechanism, while the other suggests an E2 mechanism.

I think that the phenyl group should not be able to promote the formation of a carbanion in an E1cb mechanism. All the examples of E1cb mechanisms I have seen involve deprotonation of compounds which have $\mathrm{p}K_\mathrm{a}$ values of 20 or less, and toluene does not fit this.

I think that it is easier for the molecule $\ce{Ph-CH2-CH2-F}$ to undergo E1cb mechanism than E2 mechanism. It can be also possible that the molecule undergoes elimination through a mixture of E1cb and E2, but it can be said that majority portion of the molecules will prefer the E1cb rather than any other pathway.

First of all, an E2 mechanism goes via simultaneous cleavage of the $\ce{C_{\beta}-H}$ and $\ce{C_{\alpha}-LG}$ bonds (LG being the leaving group). So, the rate of the reaction depends on the ease of breaking these two bonds. In this case the leaving group is fluoride ($\ce{F-}$), which has a very strong bond with the $\alpha$-carbon, making it a bad leaving group. So, due to this reason, the rate of E2 should lower for this molecule.

Now, if we check the plausibility of E1cb reaction pathway, we will find that it is most suitable in this case.

Secondly, the breaking of $\ce{C-F}$ bond doesn't happen in the rate determining step, which also doesn't alter the rate of the reaction in this case. 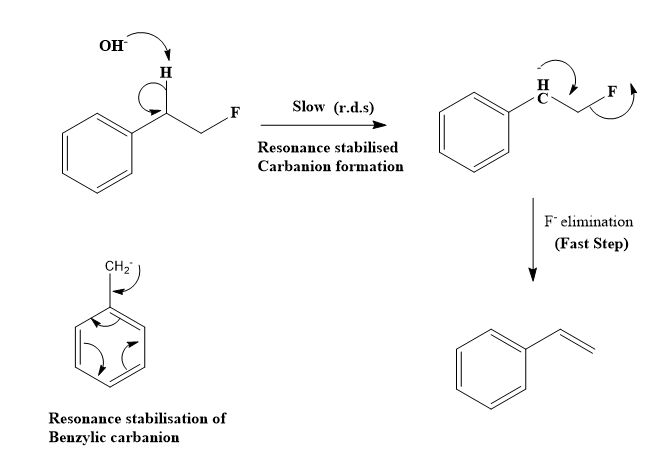 So, observing the above mentioned cases, it can be definitely concluded that E1cb is the more preferable pathway to undergo $\beta$-elimination to form Styrene.

37
Why does alcoholic KOH prefer elimination whereas aqueous KOH prefers substitution?
3
Why can't bicyclic structures undergo E2 elimination?
4
How does one properly do this alkali melt? (Pfleger's indigo synthesis)
4
Why does the E1cb mechanism proceed in the specific way it does?
0
Is 1,3 alkyl shift allowed in Cyclobutyldicyclopropylmethyl Cation?
0
Why can alcohol undergo elimination just by sulphuric acid?
0
Elimination reaction mechanism decision (order = 1 or 2)
3
Does Ei or pyrolytic elimination reaction undergo carbocation rearrangement?