How should a triple bond be depicted in skeletal structures?

Draw the skeletal structure for the following compound: $$\ce{HOCH2CH2OCH2C#CCH2CH(CH3)2}$$

I can't figure this out.

So, is the triple bond depicted any differently from the other bonds in the molecule? If so, why?

My guess, is that you forgot to take the linear disposition of the carbon-carbon triple bonds into consideration.

So the bond lines cutting through four carbon atoms will be linear, and not zig-zagged as in the rest of the molecule (the latter implies tetrahedral geometry accorded by the $sp^3$ carbon-carbon bonds) 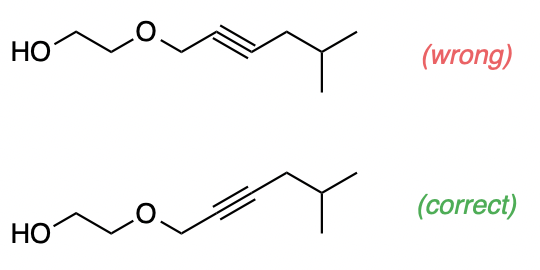 The first diagram may feel more "graceful" (the term I used when I defended my incorrect depiction of the triple bond to my teacher when he asked me a similar question a while back), but it is incorrect.

Atoms that are isoelectronic with carbon and bearing two double bonds (or one single bond and one triple bond) should be drawn with the bonds separated by a 180° angle.

This includes carbon itself, of course. Some examples are given, including:

Note the 180° angles at the nitrile carbon (on the left), as well as both the carbon and nitrogen (on the right). Furthermore:

Large rings that contain triple bonds should depict the triple bonds in a linear fashion, just as they would be depicted in an acyclic diagram.

Not the answer you're looking for? Browse other questions tagged organic-chemistry notation or ask your own question.

0
Why are triple covalent carbon to carbon bonds drawn linearly in skeletal structure?

8
What is the difference between an angular and linear skeletal formula?
2
Why does fusing benzene rings not produce polycyclic alkynes?
16
How to determine the worst resonance structures out of a given set?
10
Difference between Resonance Effect and Mesomeric Effect
1
Supramolecules in Spartan
5
Why is (1E,3Z,5E,7E,9Z,11E)-cyclotetradeca-1,3,5,7,9,11-hexaen-13-yne not antiaromatic?
2
Skeletal formula of methyl chloride
2
Is it possible to figure out how many carbon-carbon double bonds are present using just the molecular formula?
7
Are the triply-bonded carbons in pyridyne (and benzyne) sp-hybridised?