If the longest carbon chain is symmetric numbering-wise (meaning the numbering schemes are identical both ways) and has all alkyl substituents, should one prioritize the largest alkyl group?

If numbering from each end of the parent chain gives the same locants, the next criterion stipulates that lowest locants are assigned to the substituent that is cited first as a prefix in the name. This means in effect that alphanumerical order is used to establish the numbering when a choice is possible since alphanumerical order is used to establish the order of citation of substituent prefixes in the name.

For example, a correct systematic name is 4-ethyl-5-methyloctane (not 5-ethyl-4-methyloctane) since ethyl is cited first as a prefix in the name. 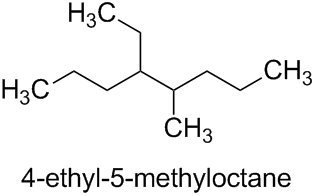 Another correct systematic name is 4-ethyl-5-propyloctane (not 5-ethyl-4-propyloctane). Again, the reason is that ethyl is cited first as a prefix in the name. The size of the substituent is not relevant in this step. 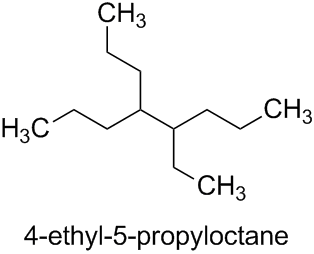 0
Priority in naming organic compound
0
IUPAC nomenclature query
1
What should be the name of this substituted cyclopentane?

8
"Tie-breaker" rules for IUPAC nomenclature of organic compounds
2
Nomenclature with Complex Substituents
9
IUPAC naming - choosing the main branch
1
Order of priority for including functional groups in the parent chain compared to order of priority for numbering the parent chain
1
Numbering in phenolphthalein versus ascorbic acid
4
IUPAC naming of 1,2-disubstituted cyclohexane derivative
1
Is the correct parent chain the longer one or the one including two double bonds?