When looking up names for simple organic molecules, the idea of a preferred IUPAC name (PIN) often comes up.

My understanding was that the PIN was meant to provide a unique and unambiguous name for a given molecule based upon strict applications of the IUPAC guidelines for nomenclature.

Whilst some PINs are clearly applications of these formal IUPAC guidelines, other PINs are trivial names. To give some examples:

Clearly most people still refer to these molecules as acetic acid, acetone, and phenol; but it seems arbitrary that some trivial names are also the PIN whilst others are not (that is not to say that the other names are forbidden, as pointed out in the comments, with reference to P-10 of the recommendations).

Why do we need the PIN, and why does it not always conform to the strict application of the IUPAC guidelines?

[...] We have developed rules for assigning 'preferred IUPAC names', while continuing to allow alternative names in order to preserve the diversity and adaptability of the nomenclature to daily activities in chemistry [...]

It might not be the answer we are looking for, but the end of the day, I strongly suspect it is simply arbitrary. The examples you have cited are very illustrative. Here is one more inconsistency which, to the best of my knowledge, is arbitrary.

"Acetic acid" is a PIN that may be modified by substitution (P-65-1.1.1), but only to a limited degree (P-15.1.8.2.1). Therefore "bromoacetic acid" is also a PIN. On the other hand, acetylene is also a PIN; however, substitution of any kind of not allowed (P-31.1.2.1). So, instead of bromoacetylene, the PIN is bromoethyne. (Bromoacetylene, however, remains acceptable within general use. All the names listed below that aren't followed by "(PIN)" are acceptable within general use.) 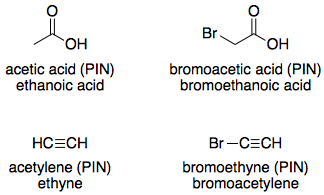 What makes IUPAC decide that - for PIN purposes - one trivial name is substitutable, whereas another is not? Or in the examples you have cited, why is one trivial name the PIN whereas another isn't? Of course, the rules state that it must be so, but to the best of my knowledge, there isn't any explanation of the philosophy behind the choice of PIN. Maybe I'll be proven wrong, though, and I'd be glad to see it.

To be honest, if you could come up with one, I'd be surprised. It's very tough to draw a line. Maybe we can agree that "acetone" should be a PIN, but should "neopentane" be a PIN as well? How about "estrogen"? Someone has to just arbitrarily choose where to draw a line, and it just so happens that IUPAC has gone with something stricter that doesn't use "acetone" as a PIN.

Anyway, just to reiterate - many of these names are perfectly valid IUPAC names. It is just that, for one reason or another, IUPAC has not selected them as preferred IUPAC names.

1
IUPAC naming of isocyanides
0
Is toulene be a part of the systematic IUPAC name?