What is the molecular structure of xenon hexafluoride?

Xenon hexafluoride, $\ce{XeF6}$, can be obtained by reaction of xenon with excess fluorine gas.

What is the gas-phase structure of the molecule?

What experimental evidence is there to support it, and is there any theory which allows for an prediction of the structure?

[Note that solid $\ce{XeF6}$ has multiple polymeric forms, and is hence excluded from the scope of this question.]

TL;DR Xenon hexafluoride has a fluxional structure in the gas phase, with multiple rapidly interconverting conformers. The three most important conformers have $C_\mathrm{3v}$, $O_\mathrm{h}$, and $C_\mathrm{2v}$ symmetries. The minimum energy conformer is probably $C_\mathrm{3v}$.

The structure of xenon hexafluoride ($\ce{XeF6}$) has always been controversial; it is a famously strong oxidising agent, so experimental studies of it have been hampered by difficulties in the isolation and storage of pure samples.

Early studies indicated that the structure of $\ce{XeF6}$ showed deviations from octahedral symmetry. Gas-phase electron diffraction (dating from 1968) showed that the structure was approximately, but not exactly, octahedral: the experimental diffractogram differed from the theoretical diffractogram calculated for a hypothetical octahedral molecule.1 The authors considered a wide range of possible geometrical distortions, and found that $C_\mathrm{2v}$ or $C_\mathrm{3v}$ structures were relatively consistent with the spectrum obtained, with the latter being the most probable configuration.2 These could be interpreted in terms of a stereochemically active lone pair:

This approach has stood the test of time, and is reproduced in multiple recent inorganic chemistry textbooks.3–5

At roughly the same time, experiments with molecular beams of $\ce{XeF6}$ were carried out by Falconer et al. These beams were not deflected in an inhomogeneous electric field, and the authors derived an upper bound of $\pu{0.03 D}$ for the electric dipole moment of a rigid structure.6

This was occasionally presented as evidence for an undistorted structure, but the calculations did not take into account the possibility of a highly fluxional process, and later Bernstein and Pitzer showed that depending on the barrier height, dipole moments up to $\pu{0.6 D}$ could be plausible.7 On top of that, the distorted conformers were not expected to have large dipole moments, as the dipole moment of the lone pair would oppose the net dipole moments of the $\ce{Xe-F}$ bonds.

Vibrational spectroscopy offers a unique possibility to eliminate, or at least reduce, the influence of dynamic processes, since the timescales involved are extremely short. In 1972, Claassen et al. carried out infrared (IR) and Raman analysis of $\ce{XeF6}$ at various temperatures.8 A group theoretical analysis leads to the prediction that an octahedral molecule should possess two IR-active bands, one $\mathrm{t_{1u}}$ stretch and one $\mathrm{t_{1u}}$ bend. However, the IR spectra at both room temperature and $\pu{4 K}$ (in an argon matrix) show at least three stretches alone. Similar inconsistencies with an octahedral structure were observed in the Raman spectra. However, the extremely broad peaks precluded a conclusive assignment to a specific distortion.

Based on all the experimental data, Pitzer and Bernstein concluded that $\ce{XeF6}$ could be described by a pseudorotational model with the potential minimum most likely being a $C_\mathrm{3v}$ structure.9 Following in the footsteps of Bartell and Gavin,2 they attributed this deformation to a second-order Jahn–Teller effect, which we will now turn to.

Clearly, traditional VSEPR theory cannot satisfactorily explain the structure of $\ce{XeF6}$. Often, the structure is described as having a stereochemically active but fluxional lone pair, which is generally accurate; however, VSEPR cannot be used to predict the region of space which the lone pair occupies.

We could reject the 2c-2e bonds utilised in VSEPR theory, and move instead to 3c-4e bonds, which works for the lower fluorides $\ce{XeF2}$ and $\ce{XeF4}$, and is briefly explained here. Essentially, each $\ce{F–Xe–F}$ interaction is modeled as a linear 3c-4e interaction. However, this model predicts a regular octahedral structure, which is again incorrect.

As far as simple bonding theories go, the best explanation is given by qualitative molecular orbital theory. A MO scheme for octahedral $\ce{XeF6}$ can be constructed from Xe 5s, Xe 5p, and F 2p orbitals (neglecting π-type interactions). It is similar to the one for $\ce{SF6}$ (see here), except that there are two more electrons: 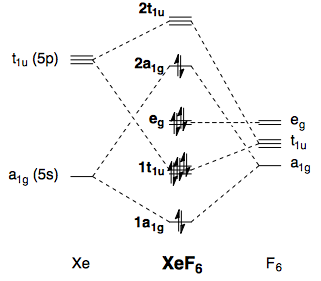 This opens up the possibility of a second-order Jahn–Teller distortion, and I have described the mathematical basis of this elsewhere. By distortion to a lower symmetry, the HOMO and LUMO are allowed to mix, which leads to a stabilising interaction. The distortion should be mediated by a vibrational mode with symmetry $\mathrm{A_{1g} \otimes T_{1u} = T_{1u}}$, which does indeed lead to a $C_\mathrm{3v}$ structure. The Jahn–Teller effect, as well as the application to the case of $\ce{XeF6}$, is described in the textbook by Albright et al.10 I have reproduced one diagram from the book (p 364): 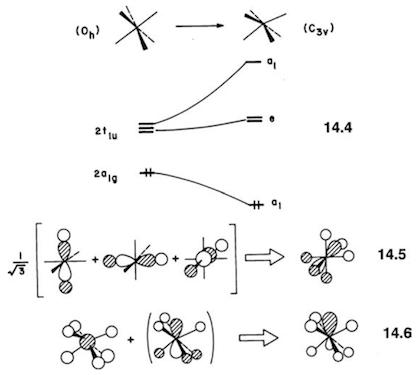 Computational studies of $\ce{XeF6}$ have generally been plagued by a strong dependency on the level of theory and on the basis sets used, due to the very small energy differences between the relevant conformers. There is still a lack of agreement on the exact details of the potential energy surface.

Kutzelnigg et al. provided the first thorough in silico investigation of xenon hexafluoride, along with a number of valence-isoelectronic species.11 They concluded that the balance between an undistorted $O_\mathrm{h}$ structure and a distorted $C_\mathrm{3v}$ structure is governed by competing effects. Distortions are found to be present when nonrelativistic Hartree–Fock theory is used, and the addition of polarisation functions (e.g., Xe 4f) to the basis set favours the $C_\mathrm{3v}$ structure. However, relativistic effects as well as electron correlation both favour the $O_\mathrm{h}$ structure. In the case of $\ce{XeF6}$, these lead to very small differences between the two structures.12

Very sophisticated coupled-cluster calculations (CCSD(T)-F12b) were carried out by Peterson et al., and led to the conclusion that the $C_\mathrm{3v}$ structure was the ground state.13 The eight equivalent $C_\mathrm{3v}$ structures (an octahedron has eight faces) underwent interconversion via $C_\mathrm{2v}$ transition states $\pu{1.08 kcal/mol}$ higher in energy. The perfect $O_\mathrm{h}$ structure was found to be a saddle point $\pu{1.80 kcal/mol}$ above the ground state, with a threefold degenerate imaginary vibrational frequency.

However, the accuracy of these calculations was called into question by Cheng et al., who found that the $O_\mathrm{h}$ structure was in fact a local minimum (i.e. no imaginary frequencies).14 According to the authors, the imaginary frequency found by Peterson et al. arises due to basis set effects in the CCSD(T) triples correction.

All in all, computations broadly support the fact that $\ce{XeF6}$ is dynamically distorted from $O_\mathrm{h}$ symmetry. However, the exact details have yet to be ironed out, and given that the energies involved are so close to each other, "an unbalanced calculation may fortuitously give the right answer" (in Kutzelnigg's words11).

12. Interestingly, $\ce{RnF6}$ is predicted to be octahedral even at the SCF level, i.e. ignoring electron correlation. This is a result of the strong relativistic effects. On the other hand, $\ce{ClF6-}$ is octahedral simply because of electron correlation effects; the energy gained by distortion is insufficient. Together, these clearly show that even the second-order Jahn–Teller approach described earlier is incomplete, as it fails to explain other species valence isoelectronic with $\ce{XeF6}$.

Not the answer you're looking for? Browse other questions tagged molecular-structure halides noble-gases or ask your own question.

5
Why is the dipole moment of XeF$_6$ zero?
58
Why do compounds like SF6 and SF4 exist but SH6 and SH4 don't?
23
What is the mathematical basis behind the Jahn-Teller effect?
4
Structure of xenon hexafluoride
7
Is there a possible distortion of XeF6 from Oh point group to reduced symmetry?
3
The pentagonal pyramidal structure of XeOF5-
-1
How many equal Xe–O bond length are present in (XeO_6)-3?