I'm translating a Russian text in which there is the following diagram of tryptophan degradation: 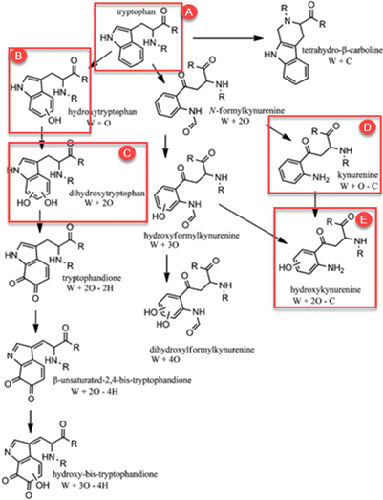 First, you can use Google Ngram viewer to check out how often and in which context proposed words and their combination is used/has been used in the literature.

Second, I feel that "mono-oxidized" is overly redundant and just "oxidized" will deliver. Even in Russian you would rarely say so ("моноокисленный" or "единожды окисленный" is usually seen as an unnecessary complication in most cases). For "dioxidized" there are plenty examples when it is used in a similar context both in inorganic and bio chemistry, so it should a safe usage from what I see.

There is also an another option to say "two-stage oxidation" ("окисленный по двум ступеням") instead of "dioxidized" if you want to underline that the process has been carried out step by step.

Not the answer you're looking for? Browse other questions tagged organic-chemistry terminology proteins or ask your own question.

3
“Adjust pH of the solution to 5.0±0.1 with acetic acid (by potentiometry)”
11
What kind of chemical used in a chromatography run could be denoted with the letters D.H.?
0
How do we indicate a volume fraction like 0.05 in procedure descriptions?
3
What are “O-hydrocarbons”? A pharma translator's question (Russian to English, “О-углеводороды”)
1
Meaning of “MS1 and MS2 resolution” and “MS1 and MS2: Unit” in a tandem mass-spectrometry parameter list