Reason for vibration of molecules

Why do molecules of a body exhibit vibrational motion? Is it due to interaction between various molecules of the body, or interatomic interactions between atoms in the same molecule? If it is because of any of them, how can these interaction cause the molecules to vibrate?

Here is a picture and an equation that may add to the comment LordStryker made. Molecules vibrate because they have energy. First the equation, as $T \to 0$ (absolute zero), the first term will vanish, but the molecule will still have an energy given by $h\nu/2$. So even at absolute zero a molecule will have some vibrational energy, this is called the "zero point energy". The parabola (representing the hydrogen well, for example, that two hydrogen atoms will "fall into" when they bond and become a stable hydrogen molecule) gives a pictorial representation of why this must be - energy levels are quantized. Even the lowest level is above the bottom of the parabola, so even in the lowest energy level at absolute zero, the atom or molecule will still have a non-zero energy which will cause it to vibrate. 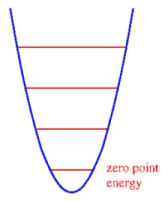 Solid or liquids are similar but much of the energy is distributed to those vibrational models. Solids, where the atoms or molecules in them don't have kinetic energy by definition (that is, they are locked in relative place, which is more or less the definition of a solid), most of the energy is tied up in vibrations either of atoms/molecules vibrating around their location in the solid or by stretching vibrations of the bonds inside the molecules. Molecules in the solid interaction with each other (if a neighbour molecule is vibrating strongly, you will pick up some of that energy because you are close to and interacting with that neighbour).

Molecules have zero-point energy as a consequence of the Heisenberg Uncertainty Principle, which directs that it is not possible to simultaneously know the position and momentum of a particle, in this case a vibrational quantum. The zero point energy, $h\nu/2$, is that minimum energy needed to satisfy uncertainty.

In contrast rotational motion can have zero energy, i.e. the molecule does not rotate, but it is then not possible to know in which direction the molecule is pointing. As soon as it starts rotating its spatial orientation is limited to only certain values; again uncertainty limits this.

As long as there is some energy, the electrons and other sub atomic bits will move randomly. This randomness will result in tiny fluctuations in the distribution of energy /mass inside the atom resulting in vibrations that can be passed on to adjacent atoms.

The fluctuations will also result in fluctuations in charge distribution inside the atom, that can affect the state of adjacent atoms, again causing vibrations and rotations.

Before long, a feedback loop could in theory arise between adjacent atoms whereby the motions of a neighborhood of atoms may appear random to the macro observer, but be quite deterministic at the sub particle level.

I have no proof of this from an experimental standpoint, but from my understanding of the topic as an energy engineer, this makes sense to me. Cheers

Not the answer you're looking for? Browse other questions tagged molecules atoms intermolecular-forces or ask your own question.

4
Is ionic bond just formed by “electrostatic” interaction between two oppositely charged ions?
9
Standards for drawing chemical molecules
10
What's the relationship between Van der Waals forces and hydrophobic interactions?
7
Why is tetrafluoromethane non-polar and fluoroform polar?
16
Can nonpolar molecules exhibit dipole-dipole forces?
1
Range of distance for Van der Waals force
3
How does a diatomic molecule vibrate in response to heat?
1
Difference between Force Field and topology, and other related questions
5
Does gas chromatography follow the “like interacts with like” rule of thumb?