Why is edta in its calcium complex still a tetraanion at pH 10?

The reactions that are given are the following:

Why is the $\ce{edta}$ given as $\ce{Na2H2Y}$ both times? Shouldn't its form be different at different pHs?

The $\mathrm{pH}$ discussions only make sense in the way you are using them for free $\ce{edta}$. Free $\ce{edta^4-}$ can indeed accept up to six protons depending on the acidity of the solvent; the most common forms are probably the neutral compound $\ce{H4edta}$ and the disodium salt $\ce{Na2H2edta}$. For these species, a $\mathrm{pH}$ equilibrium exists as you know it for polyprotic acids and only for these species is the discussion you’re beginning your post with correct.

Once $\ce{edta}$ forms a coordination compound, e.g. with calcium, things change. Six atoms of $\ce{edta}$ — four oxygens and to nitrogens — are now octahedrally surrounding the central metal ion. The complex will look something like this: 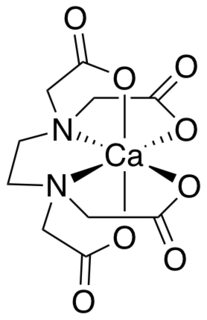 The calcium ion is of course calcium(II), the $\ce{edta}$ ligand carries four negative charges resulting in the complex anion being a dianion $\ce{[Ca(edta)]^2-}$. Technically, this species can still accept up to four protons, but only the carbonyl oxygens can now be protonated to some extent. If you do, you will encounter a very acidic oxygen-centred cation which will want to get rid of the extraneous proton again. Note that the two sites which I intuitively expect to be the most basic, the two nitrogen atoms, cannot accept any more protons since they are already tetracoordinated.

Thus, once you form a complex from free $\ce{edta}$, the equilibrium situation changes completely. We now no longer may consider $\ce{edta}$ by itself but must consider the complex as a whole; the remaining acid-base equilibrium is

As I mentioned, protonating the ligand will lead to a very acidic species (akin to protonating a protonated carboxylic acid) and therefore the equilibrium is shifted to the left.

So even though the $\ce{pH}$ values may tell you that you are dealing with a tri- or tetraanion of free $\ce{edta}$ in solution, the complex has quite different acidity constants.

Not the answer you're looking for? Browse other questions tagged inorganic-chemistry acid-base coordination-compounds or ask your own question.

8
How do copper sulphate and the like change crystal structure on adding water of hydration?
4
How does one calculate the pH of an aqueous solution of a weak acid and a weak base?
4
Why are metal oxides basic and non-metals' acidic or neutral
6
Are these reaction equations for the formation of the brown ring complex correct?
9
Bonding in alkali metal complexes
8
Structure of Borax
5
NMR of a bridging Methyl complex
3
Separating lanthanides using ion-exchange method