How does the smell of a compound come about, and is it possible to define a smell?

Colour - and eyesight in general - arises because objects reflect/transmit certain wavelengths of colour, which is detected by our eyes.

On the other hand, what gives rise to smell? Is there a branch of chemistry associated with this? Is it possible to define the smell of any substance, using some parameters analogous to wavelength in the case of sight?

Smell is what you feel when molecules of some compound (and not any kind of radiation, mind you) touch the olfactory nerves deep inside your nose. It is just another property of a compound, like molecular weight, or melting point, or color, only different.

$\ce{H2Se}$ smells worse than $\ce{H2S}$, and $\ce{H2Te}$ is worse still. A disturbing characteristic of the latter, given by an anonymous expert in the field, I'd better keep hidden so as not to offend the public taste:

Smell it, and you'll vomit farther than you can see.

As a sensation, olfaction does not seem to possess the same status as, say, vision. Most biologists, indeed most people not directly involved with fragrances or flavours seem to think that odour sensation is “subjective” and not necessarily shared by others.

What makes an odourant?

The general requirements for an odourant are that it should be volatile, hydrophobic and have a molecular weight less than approximately 300 daltons.

The first two requirements make physical sense, for the molecule has to reach the nose and may need to cross membranes. The size requirement appears to be a biological constraint. A further indication that the size limit has something to do with the chemoreception mechanism comes from the fact that specific anosmias become more frequent as molecular size increases.

To be sure, vapor pressure (volatility) falls rapidly with molecular size, but that cannot be the reason why larger molecules have no smell, since some of the strongest odourants (e.g. some steroids) are large molecules. Additionally, the cut-off is very sharp indeed e.g substitution of the slightly larger silicon atom for a carbon in a benzenoid musk causes it to become odourless.

Comparison of molecular size between a benzenoid musk (left) derived from acetophenone and its sila counterpart ( right) in which the central carbon atom in the t-butyl groups has been replaced with Si. The carbon musk is a strong odourant, the sila musk odourless.

Attempts have been made to accommodate discrepant structure-odour relations by a process known as conformational analysis. This involves exploring the space of conformations adopted by the odourant molecule when deformed away from its energy minimum. 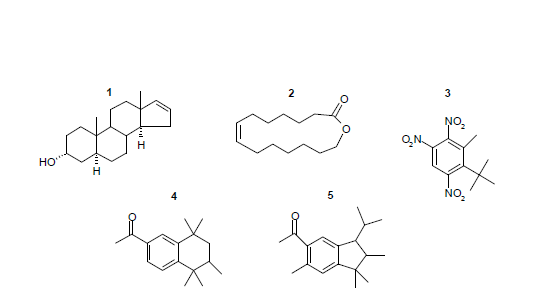 The complexity of structure-odour relations, and the fact that the three dimensional structure of the receptor site is unknown, make it very difficult to apply conventional quantitative structure activity relationships.

Many theories of Structure-odour relations (SORs) have been proposed in the past (reviewed in Moncrieff, 1951) but advances in biological understanding, not least the discovery of odourant receptors, have gradually ruled them out. There appears to be two possible types of SOR theory left standing:

Most enzyme-substrate and receptor-ligand binding relies on molecular recognition between protein and ligand. Recognition depends on interactions that can be either attractive or repulsive (Davies and Timms 1998). All attractive chemical interactions are ultimately electrostatic in nature whether they occur between fixed charges, dipoles, induced dipoles or atoms able to form weak electron bonds (e.g. hydrogen bonds).

Repulsive interactions can be electrostatic or quantum-mechanical (electron shell exchange repulsion). Almost every change in molecular structure (with some exceptions which will described below) alters the set of surface features capable of forming such attractive or repulsive interactions, and thus affects what we loosely call molecular shape.

Recently, both in vivo and vitro studies have shown that, generally receptors respond to more than one odourant, suggesting that they detect the presence not of the whole molecule but of a partial structural feature thereof, hence odotopes.

According to odotope theory the smell of a molecule is then due to the pattern, i.e. the relative excitation of a number N of receptors to which it binds.

Ethyl citronellyl oxalate, a molecule possessing a macrocyclic musk odour but linearin shape. Right: a macrocyclic musk, cyclopentadecanolide. Shape-based theories assume that the linear musk assumes a conformation close to that of the macrocyclic when binding to the receptor, hence the similarity in odour.

The idea that the nose operates as a vibrational spectroscope was first proposed by Dyson (1938) and later taken up and refined by Wright (1982). What makes it attractive in principle is that vibrational spectra share three properties with human olfaction.

Remarkably, even bonds between atoms can be detected: the acetylenic C-C triple bond of –ynes imparts a isothiocyanate-like mustard-like smell to molecules which is clearly recognizable, for example in acetylene and in methyloctynoate.

An odotope theory can explain these regularities only by assuming that the functional group is an odotope. In the older structure-odour literature, this used to be described as electronic factors (as opposed to steric). The idea was that, given that many functional groups were similar in size, the recognition mechanism must somehow be sensitive to the fine structure of the electron distribution (orbital energies, charge density, etc) of the functional group.

However this proposition has some shortfalls;

Consider for instance the SH group in, say methanethiol. Alcohols never smell of sulfur, whereas thiols always do. What could make the SH infallibly distinctive as an odotope, as compared to the OH group? Partial charge, bond length, bond angle and atom size are somewhat different between $\ce{R–SH}$ and $\ce{R–OH}$, but it is hard to see how these can be detected with absolute reliability by, say, an aminoacid side chain in the presence of thermal motion.

Replacing a C=C bond with a sulfur atom does not change odour character, suggesting that “electronic” properties of sulfur are not sufficient for molecular recognition.

By contrast, the distinctive smell of functional groups is a natural feature of a vibrational theory. Above 1800 wavenumbers, IR absorption lines are diagnostic of the stretch frequencies of diatomic functional groups.

The clearest example so far is that of boranes. The terminal B-H bond in boranes has a stretch frequency whose range overlaps with that of thiols. Turin (1996) therefore predicted that boranes should smell sulfuraceous, despite the complete absence of similarity, both structurally and chemically, between boron and sulfur.

The dependence of the sulfuraceous character on molecular vibrations and atomic partial charges, as predicted by a vibrational theory. Decaborane (left) smells sulfuraceous, and its terminal B-H bonds have a stretch frequency ˜ 2500 wavenumbers. In triethylamine-borane (middle), the B-H stretch is shifed to 2300 wavenumbers and the sulfuraceous smell is no longer present. In p-carborane (right) the near-neutral partial charges make the SH bond odourless.

In summary it it could said there is still more work needed on study of structure-odour chemistry to have conclusive evidence on the best theory, currently vibrational theory is evidently successful at explaining the fact that we smell functional groups even when sterically hindered, and in accounting for differences in smell between isotopes, while the odotope theory explains little.

The molecular mechanism of smell is still unknown. What can be said is that molecules of all sorts are usually identified in proteins (probably of many different types) and that the effect this detection has is amplified, possibly by passage of ions through a membrane, and then interpreted in the brain which we experience as a sensation. Why we experience different smells from different molecules or non at all for some, is more likely to be answered by reference to Darwin's theory of evolution.

Not the answer you're looking for? Browse other questions tagged biochemistry smell or ask your own question.

13
Does a smell imply particles or chemicals in the air?
2
Is there any way of guessing what a compound smells like?
3
Classification/Nomenclature of aroma and flavour compounds - terpenes, aldehydes, and alcohols, etc
2
What is smell??How come 2 things have the same smell
1
Why are all of the group 16 hydrides/hydrogen chalcogenides except H2O toxic?

18
What causes the smell in rotten meat-grease and how can I get rid of it thoroughly?
8
Benzaldehyde and Cyanide - if you can smell one can you smell the other?
11
Urban air pollution and the smell of freshly cut lawn grass?
0
How does alcohol keep smell and taste flavors in wine?
0
what is the difference between how taste and smell are detected?