Why does p-dichlorobenzene have zero dipole moment while hydroquinone does not?

To facilitate this discussion, here are the two structures. 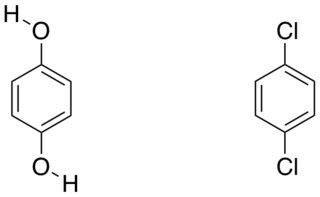 You may remember from the beginning of organic chemistry classes that free rotation can occur around single bonds. This is mostly taught for $\ce{C-C}$ bonds but true for any σ symmetric bond. On the other hand, rotation is restricted around (partial) double bonds which rely on exactly one π system such as the phenyl ring.

This means that all $\ce{C-O, O-H}$ and $\ce{C-Cl}$ bonds in the above image are freely rotatable. Rotating either $\ce{C-O}$ bond of hydroquinone will move the corresponding hydrogen out of the phenyl ring plane. (In more scientific terms: the dihedric angle will no longer be $0^\circ$ or $180^\circ$.) Therefore, planarity may be lost. Also, if both hydrogens point to the same side, inversion symmetry is lost. In both cases, a nonzero dipole moment will be observed, as highlighted in this related question.

In para-dichlorobenzene’s case, you can also rotate the $\ce{C-Cl}$ bond. However, the result is entirely philosophic in nature, as only the positions of atomic nuclei are relevant for symmetry considerations and such. However you rotate that ball at the end of a stick, the end result will be the same. There is no way in which you could reduce symmetry. Hence the molecule has zero dipole moment.

Not the answer you're looking for? Browse other questions tagged organic-chemistry aromatic-compounds dipole or ask your own question.

22
Non-zero dipole moment of hydroquinone
0
What would be the intermolecular forces between the molecules of methanetetrol?