Why do α-amino acids have a C-H bond at the α-carbon?

I've just started studying biochemistry and I read that a general $\alpha$-amino acid looks like (ignore the ionisation for now):

My question is: why isn't the general $\alpha$-amino acid formula like $\ce{CRR'NH_2COOH}$ instead of $\ce{CHRNH_2COOH}$? Coming from a physics background, the latter feels more "natural" as it is more general.

Some possible reasons I've thought of (and disqualified):

If the answer is along the lines of "it is defined this way because we actually see repeating units of these structures in proteins, so we naturally define the smallest subunit accordingly", then provide chemical grounds (if possible) to justify the fact that structures like $\ce{CRR'NH_2COOH}$ are not prevalent in proteins.

In the most general sense, the term α-amino acid does encompass doubly substituted structures like those you mention. After all, the name doesn't specify any particular substitution, or lack thereof, at the α-carbon. The name only really means that there is an amino group α to a carboxylic acid, i.e. one carbon away. Similar nomenclature is used to describe molecules where the amino group is 2, 3, ... carbons away from the carboxylic acid, also without any specification of substitution. 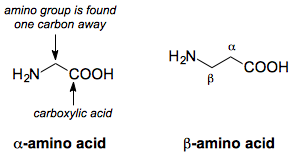 Wikipedia actually has an example of a naturally occurring α-amino acid without a hydrogen at the α-carbon. Apparently, it is produced by some fungi:

However, the term α-amino acid is nearly always used to refer to the proteinogenic amino acids, which do happen to have a hydrogen at the α-carbon.

These proteinogenic amino acids were discovered many years ago. Generally, they are obtained by treatment of proteins with acid (which hydrolyses proteins into their constituent amino acids). Their chemical formulae were painstakingly identified by a series of decomposition reactions - back in the old days, there was no NMR. The history of the discovery of the proteinogenic amino acids is described in a review article3 from 1931(!) - which tells you how long ago these were discovered.

So, part of the reason why these aren't disubstituted is simply because we found them to not be so. However, I can understand if one complains of this conclusion being intellectually unsatisfying. So, here is some extra speculation.

One major step involved in the biosynthesis of amino acids is transamination. I don't have a list on me right now, but I think most amino acids go through such a step at one point in time.

The mechanism (described on Wikipedia, or in any biochemistry textbook) necessitates that one hydrogen is added to the α-carbon. [For the organic chemists out there, this is essentially an enzyme-mediated reductive amination.]

It turns out that, on top of this, it is also possible that such disubstituted amino acids are actually harmful. According to Weber and Miller, writing in the Journal of Molecular Evolution:4

Replacement of the α-hydrogen by a larger substituent, such as a methyl group, would also increase significantly steric hindrance around the amino and carboxyl groups. Steric difficulties have been encountered in the chemical synthesis of peptides with α-aminoisobutyric acid.

An additional factor involves the ribosomal peptidyl transferase, which would develop a specificity for either an α-hydrogen or an α-methyl of the amino acid. This would prevent the synthesis of proteins containing both types of amino acids.

Not the answer you're looking for? Browse other questions tagged biochemistry amino-acids or ask your own question.