EDIT: This is what I think the splitting would look like. 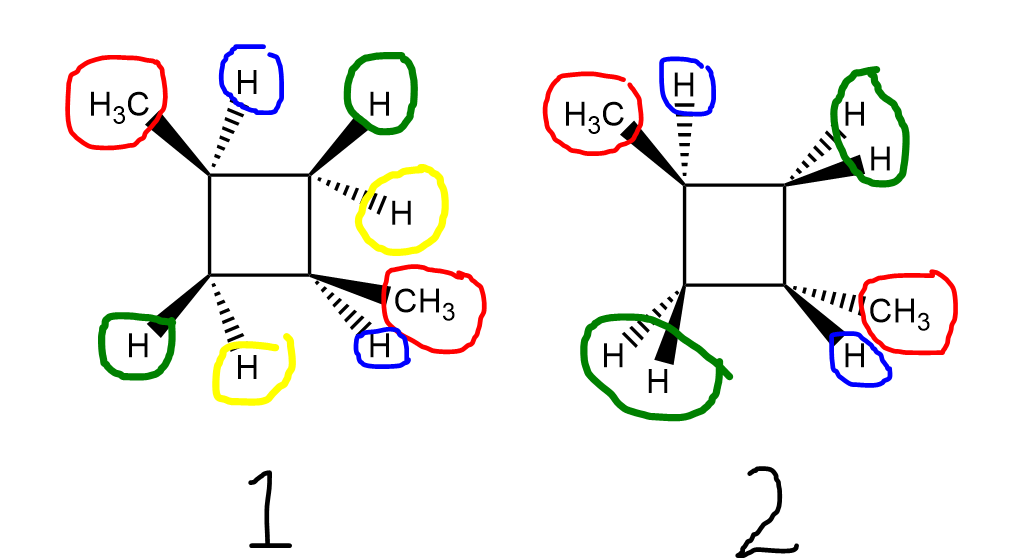 The first thing you need to take into account is that cyclobutane rings are not planar, as they are drawn on paper, but puckered. Thus, a three-dimensional structure of the two isomers would look something like this:

I expect the structure on the left to be rather stable as it is, in the way I drew it, minimising steric interactions. Any other puckering would can either be traced back to that one by rotation or mirroring or put the two methyl groups into axial position which is sterically undesirable. Thus, we can expect only one significant species in solution.

This species should have $C_\mathrm{2v}$ symmetry if I didn’t miss anything. Using the principal axis — the one through the centre of the cyclobutane ring — we can identify four sets of homotopic hydrogens. We therefore expect four signals in the proton NMR spectrum.

Coupling constants, especially those along the ring, should be clearly visible and identifyable (if not confounded due to signal overlap).

The species on the right is less rigid. It can interconvert easily between different puckered states and in each one there will be one methyl group in axial position and one in equatorial position. Still, all structures can be traced back to the one I’ve drawn through mirroring and rotation unless I missed something. So here again, we have only one set of signals at all temperatures.

This species has a lower symmetry: $C_\mathrm s$. There is no rotation symmetry axis, so none of the ring protons are actually homotopic. Transforming one onto another is only possible by mirroring, hence they are enantiotopic. Since the methyl groups and the tertiary hydrogens are also non-identical, I expect a total of six signals at low temperature. However, repuckering would transform the axial into the equatorial methyl group and vice-versa. Therefore, I expect only a set of three signals to be visible at room temperature due to rapid interconversion.

These three signals would be:

Since the protons rapidly exchange positions, I would expect the coupling constants at room temperature to be averaged. At very low temperatures, after freezing the rearrangements, these should become distinct.

So yes, rigidness of a ring due to stereochemistry does affect the number and type of signals. cis-1,3-dimethylcyclobutane is very rigid and unlikely to transform from one arrangement to another. This leads to a clean, full set of signals. trans-1,3-dimethylcyclobutane, on the other hand, interconverts rapidly between different orientations, mapping the otherwise non-identical methyl groups and protons onto each other. It therefore shows less signals than it should at low temperature.

A similar effect can be observed in cyclohexane and derivatives, where cooling to low temperatures also freezes the ring flip and causes the signals of axial and equatorial protons to be distinct.

11
Why are all the phenyl protons in benzyl alcohol equivalent in the ¹H-NMR spectrum?
3
NMR: Most deshielded protons (electron withdrawal)
4
NMR and pseudorotation
4
Shifting of axial and equatorial protons
26
Why don't equivalent hydrogens cause splitting in NMR?
5
Proton NMR Spectrum for Nicotinic Acid
2
H-NMR Equivalent Protons and Coupling of Glycerol
3
NMR sweeping magnetic field
1
The type of H-NMR spectra observed for S=PF2H and other inorganic molecules similar to this