Byproducts of LiAlH4 reduction of amides

I know that $\ce{LiAlH4}$ is able to reduce amides into amines, e.g. benzamide into benzylamine. However, I am unsure what other by-products are formed as a result.

Organic chemistry textbooks I flipped through usually don't focus on by-products, only noting that LAH ($\ce{LiAlH4}$) in dry solvent (THF, diethylether) is necessary for reduction, but when one converts amides to amines, an additional protolysis step is required: e.g. from Loudon's Organic Chemistry, chapter 21B. "Reduction of Amides to Amines" [1, p. 1080]:

In the workup conditions, $\ce{H3O+}$ is followed by $\ce{^–OH}$. An aqueous acidic solution is often used to carry out the protonolysis step that follows the $\ce{LiAlH4}$ reduction (as shown in the following mechanism). The excess of acid that is typically used converts the amine, which is a base, into its conjugate-acid ammonium ion. Hydroxide is then required to neutralize this ammonium salt and thus give the neutral amine.

Although water itself rather than acid can be used in the protonolysis step, for practical reasons the acidic workup is more convenient. Thus, the extra neutralization step is required.

The latter $\ce{H2O}$-quenching step is the reason why $\ce{AlH3}$ is not remained among reactive species and, according to Brown, the brutto-formula of the metal-containing side-product is $\ce{LiAlO2}$ which is in agreement with stoichiometrical equation for reactants (amide : LAH = 1 : 0.5)[2]:

It is also worth noticing that if there is moisture, LAH readily reacts with water producing $\ce{LiOH}$ and $\ce{Al(OH)3}$. Also, there is a chance of side-reaction with the solvent, such as formation of lithium amide complexes with THF.

When less than stoichiometric quantities of $\ce{LiAlH4}$ are used for the reduction of primary amides, the corresponding nitrile may be formed: 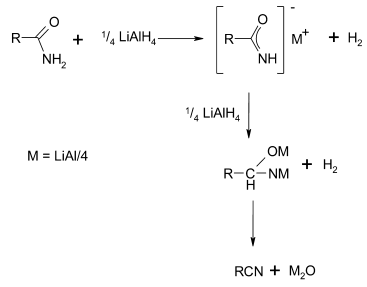 Moreover, high selectivity toward the nitrile is also observed with amides containing electron-rich quinoline systems. If traces of water are present, partial reduction of amides to aldehydes over $\ce{LiAlH4}$ can also comprise an undesirable competing reaction. Hydrolysis to the alcohol product has also been reported for secondary amide substrates.

Not the answer you're looking for? Browse other questions tagged organic-chemistry reaction-mechanism carbonyl-compounds amines or ask your own question.

3
Reduction of terephthalic acid to an alcohol (or phenol?)
4
Are all amides also amines?
11
Reduction of α,β-unsaturated nitro compounds
6
How to convert benzamide to benzylamine?
2
Distinguishing Test for Organic Compounds
1
What would happen if the reaction of reduction of carboxylic acids by LiAlH4 is carried out in alcohol?
4
Does the Hofmann Rearrangement extend to Secondary Amides?
7
Reduction of carbamate with LAH