In Peter Sykes' A Guidebook to Mechanism in Organic Chemistry regarding the retention of configuration of reaction of alcohols with $\ce{SOCl2}$:

The rate at which the alkyl chlorosulphite intermediate breaks down to $\ce{RCl}$ is found to increase with increasing polarity of the solvent and also with the increasing stability of the carbocation $\ce{R+}$: an ion pair $\ce{R+SOClO-}$ is almost certainly involved.

But it is nowhere mentioned whether a carbocation rearrangement is possible or not.

In "NCERT Chemsitry Class 12" in the section of Preparation of Alkyl halides from Alcohols:

The hydroxyl group of an alcohol is replace by halogen on reaction with concentrated halogen acids, phosphorous halides or thionyl chloride. Thionyl chloride is preferred because the other two products are escapable gases.

If that method is preferred, then I assume rearrangement does not occur.

The Mechanism of the reaction

The reaction of an alcohol with thionyl chloride under base-free conditions is one of the most significant examples of the SNi mechanism (DN+ANDe to give it it’s correct IUPAC designation, which is perhaps more instructive in this case).

There are two steps to the SNi mechanism, as shown below (figure taken from Bruckner, Organic Mechanisms [1]): 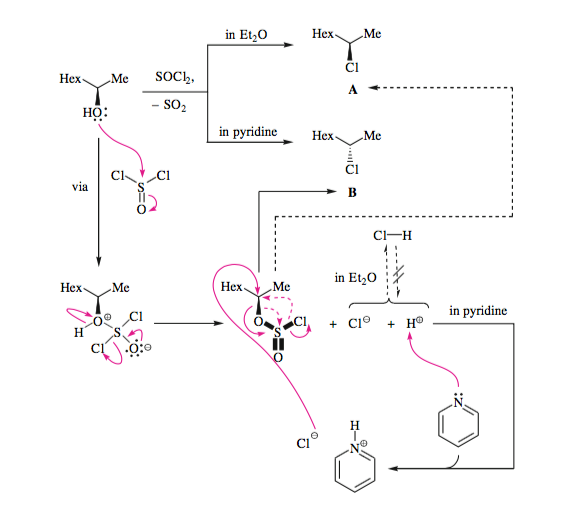 Step 1: The alcohol reacts with thionyl chloride to afford an alkyl chlorosulfite, which can often be isolated.[2] At this stage, the oxymethine stereocentre hasn’t been touched– it’s the second step that will determine the stereochemistry.

Step 2: The chlorine is delivered intra-molecularly, with extrusion of sulfur dioxide gas. Since the sulfur is being delivered from the same face that the hydroxyl was on, the reaction occurs with retention overall. This can be seen in the dotted lines in the figure above.

Two things are worth noting at this stage:

The simple answer to your question is that at no stage of the reaction is it thought that there is any free carbocation concentration, making rearrangement less likely on kinetic grounds (along with elimination, which could equally be argued by your logic).

The ion pair theory is such that the carbocation remains closely associated with the leaving group, allowing the nucleophilic attack to occur rapidly without the need for an additional collision to take place.

[#]: You can read about this in any advanced organic chemistry text such as Carey or March, and is a bit too long of an explanation for me to give satisfactorily here