In short, cyclobutane adopts a certain, non-planar, configuration in order to reduce ring strain caused by the fact that carbons are $\mathrm{sp^3}$ hybridised. That much is understandable.

I checked the answer and I was right. However, I couldn't think of something that could justify why this particular structure is not possible. That exactly is my question.

TL;DR Planar structure is definitely possible, and more so in solid state as a statistically averaged geometry in space and time (in gaseous state ring is bent by $35^\circ$). Cyclobutane can be approximately attributed with $\mathrm{sp^4}$/$\mathrm{sp^5}$ hybridization, and the strain caused by non-bonded $\ce{H...H}$ repulsions ("eclipsing") can be reduced to minimum by introducing ring substituents:

Single-crystal diffraction studies of octahydroxycyclobutane, an $\ce{OH}$-substituted derivative, in late 1960s showed that unit cell symmetry implies a planar ring; further it's been supported by possible H-bonds formation [1]. A hypothesis that a statistically disordered nonplanar ring may exist has been rejected as it possessed worse agreement with experimental data.

20 years later crystal structure of cyclobutane at low temperature ($\pu{117 K}$) has also been elucidated [2]. From [2] and references therein:

The gas-phase equilibrium conformation, as derived from electron diffraction and spectroscopic experiments, is nonplanar with a dihedral angle of about $35^\circ$ and an inversion barrier of only $\pu{6 kJ mol^-1}$. The puckering of the molecule is observed in Raman-spectra, and the corresponding absorption band is still present in the solid at $\pu{113 K}$. Theoretical calculations using ab initio methods also result in a bent conformation as the energetic minimum.

As one would expect from the shallow potential of the ring inversion, there are various planar and bent derivatives, and it does not seem possible to predict the ring conformation from the substitution pattern.

In contrast with octahydroxycyclobutane, a statistically disordered model was considered more reliable. Although no particular close $\ce{H-H}$ contacts were observed, an averaged ring is considered planar: 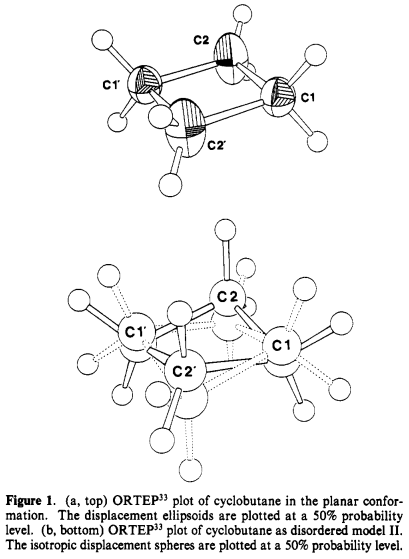 Most importantly, electron density map suggests rather increased $\mathrm{p}$-character in hybridisation (like $\mathrm{sp^5}$ in case of cyclopropane) with higher $\pi$-character of $\ce{C-C}$ bonds in comparison with the one expected for expected for alkanes:

The residual electron density shows significant maxima in positions between the carbon atoms. These maxima are displaced tangentially by $\pu{0.10(3) A}$ to the outside of the $\ce{C-C}$ bond vectors of the time- and space-averaged molecule, indicating a "banana bond" type electronic arrangement which is frequently found in highly strained small ring systems. In cyclopropane the covalent bonding maxima are displaced by $\pu{0.2 A}$ from the $\ce{C-C}$ vectors of the carbon triangle. Since in cyclobutane there is reduced ring strain our observation is in good agreement with the cyclopropane findings.

The difference between the bond overlaps of the planar and non-planar models is very small. [...] This clearly indicates that other interactions (even if small), must be dominant in causing non-planarity of the molecule. Non-bonded repulsions make a dominant contribution in determining conformations in acyclic and larger cyclic systems (e. g. ethane, cyclohexane), and they favour staggered arrangements of $\ce{CH}$-bonds. In a planar model of cyclobutane all hydrogen atoms are in eclipsed positions, this is a cause of additional strain and is energetically less favourable. A relieve is obtained by bending the skeleton of the molecule, since the $\ce{CH}$ bonds are then approaching a staggered conformation.

Cyclobutane, just as cyclopropane, is a strained cycle with the bent "banana" bonds with intermediate character between $\sigma$ and $\pi$, which allows for mimicking the behavior of double-bond compounds, such as decolorization of bromine water [4, p. 195], even though protons in cyclobutane are less acidic than in cyclopropane:

Four-membered rings also exhibit angle strain, but much less than three-membered rings, and for that reason are less easily opened. Cyclobutane is more resistant than cyclopropane to bromination, and although it can be hydrogenated to butane, more strenuous conditions are required.

23
How does the cyclopropyl group influence conjugation and aromaticity?

35
Why do SN1 and SN2 reactions not occur at sp2 centres?
2
Understanding the hybridization of cyclohexane?
5
How can three p orbitals per atom bond in tin (II) sulfide?
12
What makes trans fats more harmful than saturated ones?
13
Are carbocations necessarily sp2 hybridized and trigonal planar?
1
Acid Catalysed Ring Expansion – Mechanism?
4
Is hybridization of the cyclopropyl anion sp5?