How can we qualitatively predict $\sigma-$bond strengths of overlap between:

Another book Inorganic Chemistry by JD Lee states this: 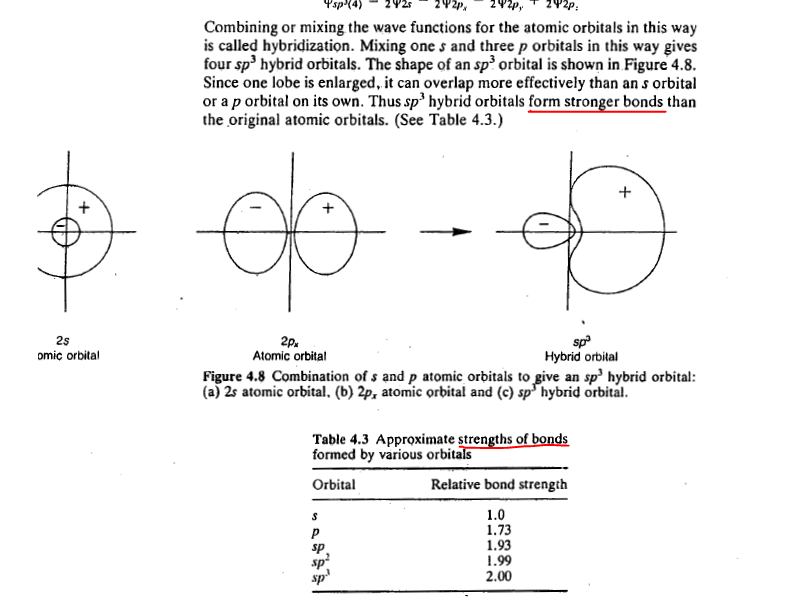 Are the facts stated in the above books correct or justified? Is there any order of orbital overlap strengths? If so can we predict it qualitatively?

I think the issue might be what orbitals are being referred to. Both books could be correct if they are referring to different $\mathrm{p-p}$ overlap. For example, suppose two atoms are bonding along the z-axis. $\mathrm{p_z}-\mathrm{p_z}$ overlap would be greater than $\mathrm{s-s}$ because the lobes of the p orbitals extend out to meet each other between the two molecules. If however we looked at $\mathrm{p_x}-\mathrm{p_x}$ overlap, the $\mathrm{s-s}$ overlap would be greater because the p lobes don't extend toward each other. Increasing hybridization increases overlap because it combines the directionality of p orbitals (that they extend out away from the atom) and the electronic density of s orbitals (larger space for overlap to occur).

Just to show one counterexample, it is commonly known that the strength of C–H bonds increase going from alkanes to alkenes to alkynes. That is to say, the bond strengths increase in the order $\ce{C_{sp^3}-H} < \ce{C_{sp^2}-H} < \ce{C_{sp}-H}$. This clearly contradicts the supposed trend given in the book of $\mathrm{sp}$ orbitals forming slightly weaker bonds than $\mathrm{sp^3}$.

From the second table in this Wikipedia section:

As far as I am aware, this trend is mainly rationalised using bond lengths.

Are the facts stated in the above books correct or justified?

Some parts of it (e.g. the general trend of $\mathrm{s} < \mathrm{p} < \mathrm{sp}^n$) might be correct, as already well addressed by Tyberius' answer, but other parts (especially these magic numbers) are highly debatable.

Not the answer you're looking for? Browse other questions tagged bond orbitals hybridization or ask your own question.

5
How can three p orbitals per atom bond in tin (II) sulfide?
2
Atomic orbitals: how is bond strength related to stability, energy, bond length?
1
Hybridisation and bond strength
13
Explanation of the strength of phosphorus–oxygen bond