Reduction of 1,4-benzoquinone in the synthesis of 1,5-diazocane

Synthesize 1,5-diazocane using only benzene as a source of carbon atoms, and ammonia as the only source of nitrogen atoms.

As the first process would create cyclohexane and be difficult to manipulate, I went with the second option. To synthesize phenol from benzene, I used a nitration, followed by reduction to create aniline, then used nitrous acid to create the benzenediazonium salt, and decomposed the salt in the presence of water to create phenol. After the oxidation of phenol I got 1,4-benzoquinone.

Now, realizing that I would need to create 1,3-propandial in order to use $\ce{NH3/NaBH3CN}$ to create 1,5-diazocane, I attempted to make 1,3-propandial from 1,4-benzoquinone. Ozonolysis of 1,4-benzoquinone produces 2-oxo,1,3-propandial, which has an extra carbonyl group. Because of the many carbonyl groups involved in this compound, I was thinking of removing the carbonyl groups directly from benzoquinone, and doing an ozonelysis from there. However, I was not sure if any standard carbonyl reactions, such as the Wolff-Krishner or the Clemmensen reaction could be applied to remove the carbonyls, seeing as they are heavily resonance stabilized.

Therefore, I was wondering if these reactions do proceed on benzoquinone, and if not, then what other plausible ways of synthesizing 1,5-diazocane exist?

The novel twist in the following synthesis is to perform a double Beckmann rearrangement in the penultimate step. 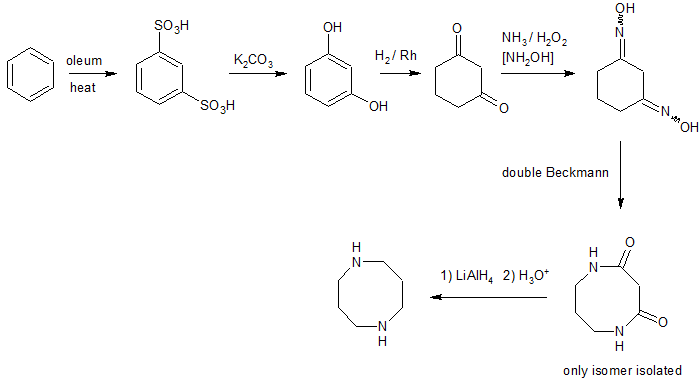 At this juncture the temptation would be to alkylate diamine 8 with dibromide 6 to synthesize 1,5-diazacane (13). But this type of reaction is fraught with problems such as polymerization and overalkylation. Boc protected hydrazine 7 has been shown1 to provide pyrazolidine (9). Although hydrazine can be prepared from ammonia via chloramine and ammonia via the Olin Raushig process, it is unlikely to be conducive to the academic laboratory. However, diamine 8 has been transformed into pyrazolidine (9) with bleach via a more facile intramolecular process.2 To assure the use of ammonia, the dibromide 6 can be treated with excess ammonia to provide diamine 8.

Pyrazolidine (9) can be acylated with malonyl acid halide 5 followed by reduction to alcohol 11. Ring closure to tetrahydro-1H,5H-pyrazolo[1,2-a]pyrazole (12) involves conversion of alcohol 11 to the bromide, neutralization of the intermediate hydrobromide salt with base and heating to effect facile intramolecular alkylation. A second option is to alkylate hydrazine 9 with dibromide 6, a process that is not as susceptible to polymerization as the previously discussed process. Finally, reduction of the N-N bond in hydrazine 12 is accomplished by hydrogenation3 to afford the target molecule 1,5-diazacane (13).

ADDENDUM: If ester 10 were to cyclize, LiAlH4 reduction would form hydrazine 12. 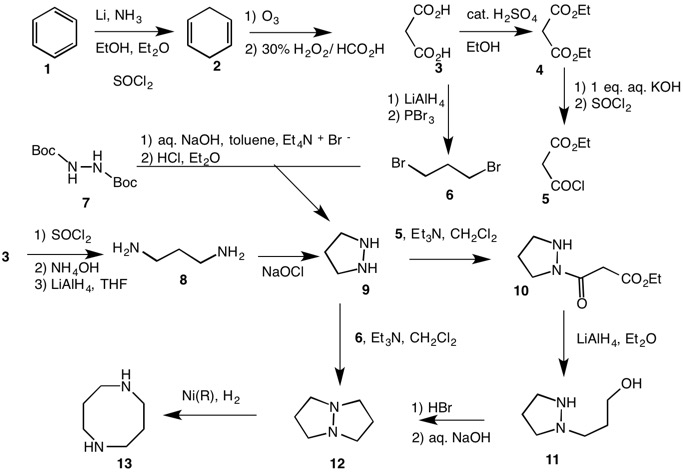 15
Can recent developments improve the total synthesis of B-12?
10
The appliance of LAB in amide reduction
6
How is the yield of a complex organic synthesis defined?
0
How to improve efficiency of the diamine synthesis from fluorescein?