Can lead-acid batteries release CO? Or can a CO sensor detect gasses other than CO?

I recently found myself troubleshooting a CO alarm on a houseboat. Inside the cabin, a Fluke CO-220 was reading 40 ppm. In the generator engine compartment, the CO level was zero (while the generator was running). We eventually found the source of the CO to be a large lead-acid "house" battery which was warm and leaking: 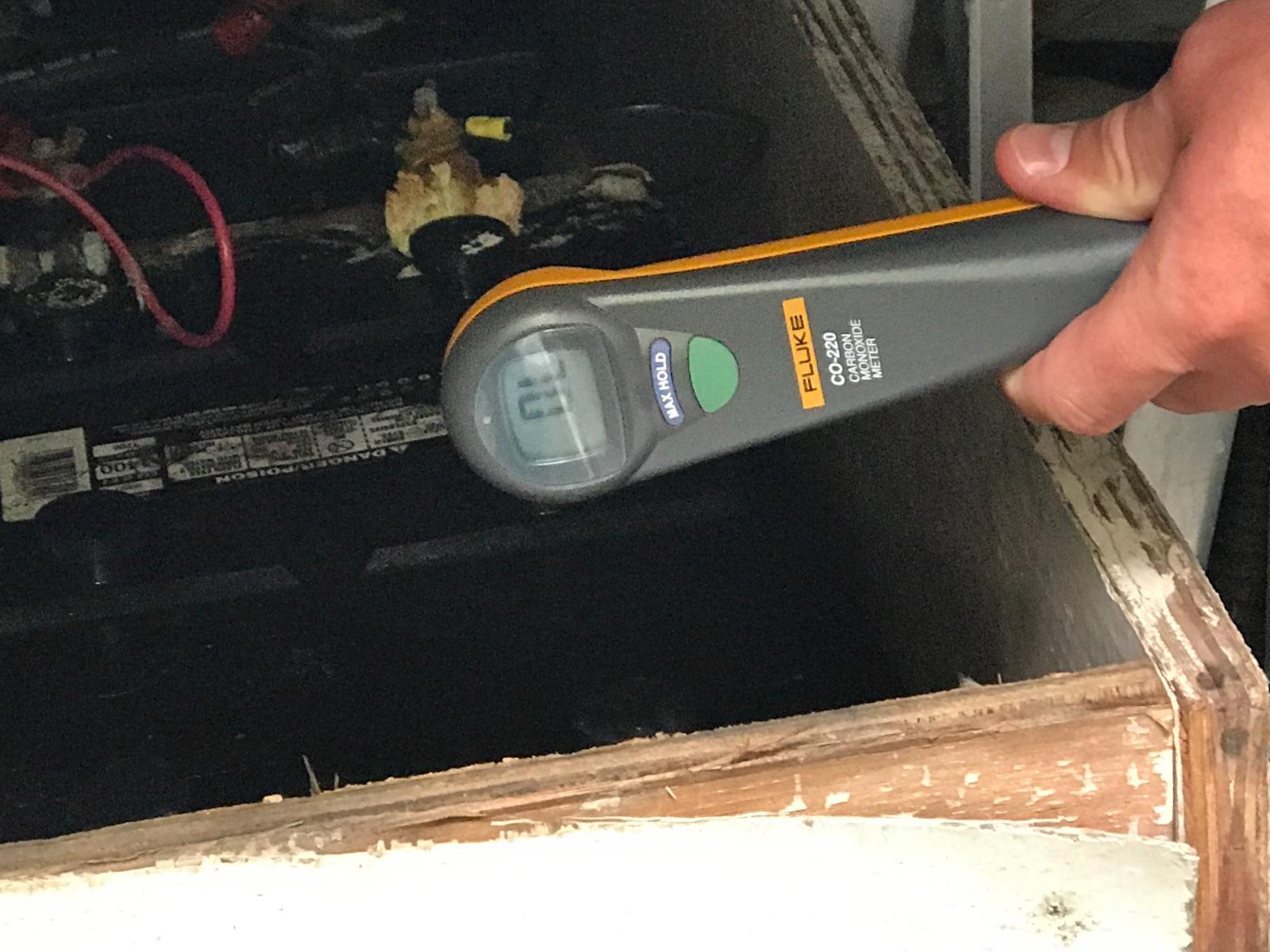 Mechanics replaced the batteries, and ensured the battery box was properly sealed and vented. After this, the CO levels were at zero.

This article discusses the chemical reactions of a lead-acid battery, and as far as I can tell there is no carbon involved whatsoever. So I believe the answer here to be "no".

Can a Fluke CO-220 detect gasses other than carbon monoxide?

The CO-220 manual says nothing about any gasses other than CO. In the specifications:

I contacted Fluke and they responded with:

I do not know what gas batteries would put off and the CO-220 has a senor [sic] for CO only. Hope this helps.

I assume the answer here is also "no".

So then, what was going on?

You're probably picking up hydrogen gas, which is produced when lead-acid batteries are overcharged at high charging voltages (a danger in its own right). This article details a situation similar to yours: charging a lead acid battery in a golf cart (in a confined space) sets off a $\ce{CO}$ alarm, and typical sensors are activated by $\ce{CO}$ at levels of 150 ppm for 30 minutes and/or 300 ppm $\ce{H2}$ for 30 minutes. Because $\ce{CO}$ is not produced by battery charging, the offending gas is thus identified as hydrogen. After venting, the levels recede.

Also see this post from Hawk Environmental, which details how hydrogen gas can create false positives for carbon monoxide. This post goes into a little more detail about the hydrogen/carbon monoxide sensor issue, and the author states that:

Carbon Monoxide detectors use something called a "Metal Oxide Semiconductor (MOS)" sensor, which detects a variety of gases including Hydrogen.

A MOS sensor calibrated for CO will give a false positive in the presence of Hydrogen gas at ~10% of the actual value. So, that ~85ppm reported of CO was in reality ~850ppm of Hydrogen gas.

Finally, in an article in the September 1996 issue of Fire Engineering, entitled "Other gases may set off $\ce{CO}$ detectors" (here), it is stated that

CO detectors are electrochemical sensors, which detect a variety of specific gases. In most cases, the gas of interest reacts with the chemical solution in the sensing electrode to produce ions (charged particles) that move through the solution to an electron-accepting electrode, completing an electric circuit. The number of ions produced and the magnitude of the current developed are proportional to the concentration of the gas being measured.

I suggest you confirm/deny the above by contacting Fluke and asking them specifically if the sensor does not detect hydrogen gas at all and, if so, at what level. I strongly suspect that the well-documented behavior I've found online and summarized here is the cause of what you have observed in this case.

7
What can be used as an electrolyte in water to perform electrolysis other than salt?