Thermal 4π electrocyclic ring openings of cyclobutenes to form butadienes are known to proceed in a conrotatory manner, consistent with the Woodward–Hoffmann rules. However, there are two different conrotatory modes which can lead to isomeric products if the cyclobutene is suitably unsymmetrically substituted. Torquoselectivity refers to selectivity arising due to the preference of one conrotatory mode over the other.

The Houk group has reported some examples of counterintuitive 4π ring openings1,2 (simply considering steric interactions, the larger group generally wants to move outwards). In both cases only one isomer of the product is formed.

Why is this selectivity seen?

These can be understood by considering the frontier orbitals in the transition state of the conrotatory opening, as explained by the Houk group in earlier publications1,2 (the reactions given above were, in fact, carried out in order to provide experimental verification of their theoretical predictions). A more accurate orbital correlation diagram for the reaction is given below (modified from ref 2 to include diagrams of the relevant MOs): 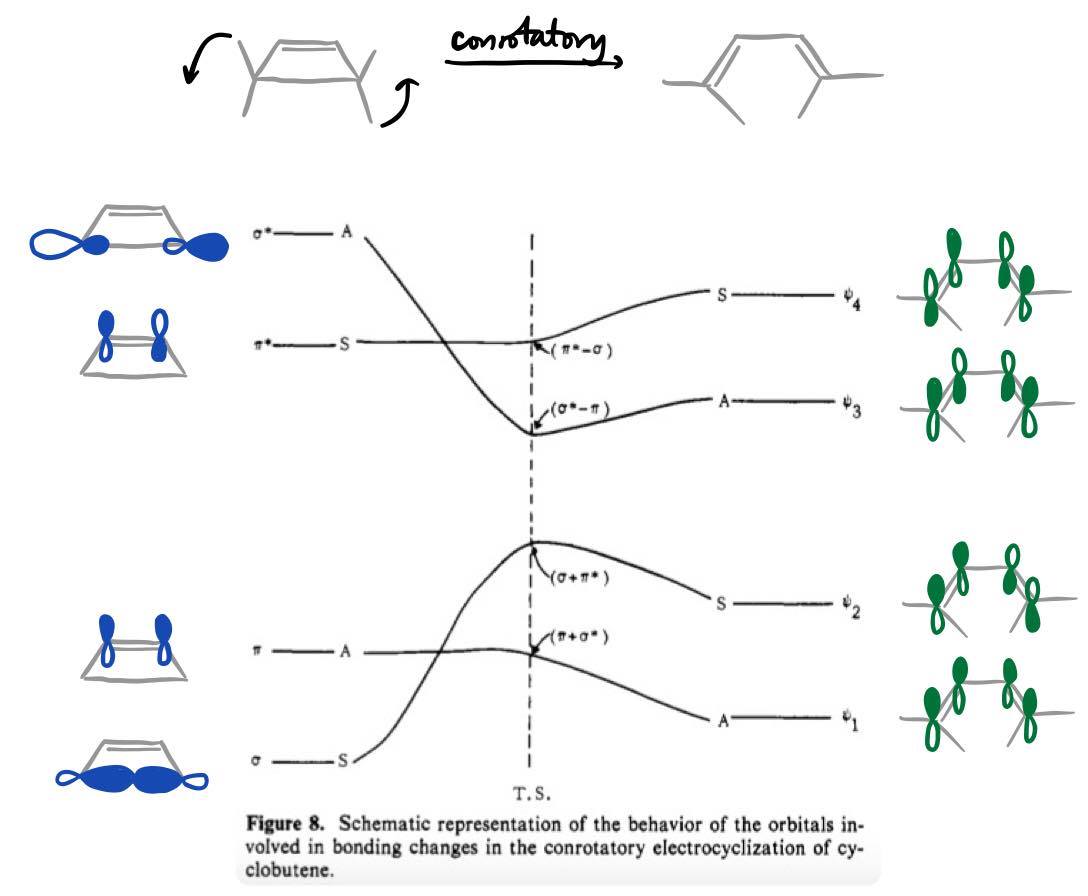 A brief explanation is as follows. As the reaction proceeds, the C–C σ bond in the reactant is stretched, and consequently the σ* orbital is initially strongly destabilised (its energy increases rapidly). At a certain point near the transition state, though, it becomes sufficiently close in energy to the π* orbital such that orbital mixing can occur; this mixing leads to stabilisation and eventual "evolution" into the HOMO of butadiene.

The dashed orbitals in the following diagram represent the positions of these orbitals in the TS for both cases of outward and inward rotation. In the case of outward rotation, the substituent orbital can only interact with the lobe on C–3 which is in close spatial proximity; however, in the case of inward rotation, the substituent orbital can interact with the lobes on both C–3 and C–4. 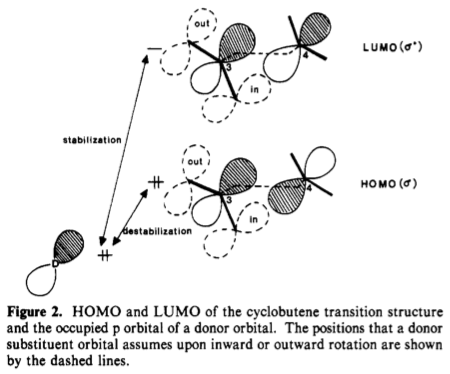 For a donor substituent:

Based on these reasons, donor substituents generally prefer to rotate outwards. In the case of OH, this preference was calculated to be a whopping 16.4 kcal/mol.3

For acceptor substituents, the interaction with the LUMO is not relevant as the interaction of two unfilled orbitals does not lead to any stabilisation. However, inward rotation maximises the stabilising interaction with the HOMO, since this is enhanced by overlap with the lobe on C–4. Hence, acceptor substituents generally prefer to rotate inwards. This preference, however, is markedly smaller than in the case of donor substituents - perhaps because there is only one factor that biases the course of the reaction (as opposed to two in the case of donor substituents). Experimentally there are fewer examples of torquoselectivity with electron-accepting substituents, and for the second reaction above, the preference for the inward rotation of the formyl group was calculated to be a much more modest 4.5 kcal/mol.4

Interestingly enough, for the cyano group (-CN), a preference of 4.3 kcal/mol was calculated - for outward rotation.4 It turns out that the donor π orbitals are more important than the acceptor π* orbitals, which are relatively high in energy. The formyl group only rotates inwards because it has an exceptionally low-lying π* orbital!

Not the answer you're looking for? Browse other questions tagged organic-chemistry pericyclic stereoelectronics stereoselectivity or ask your own question.