What happens to electrons in metal complexes after excitation by visible light?

When white light shines through a solution of a complex ion of a transition metal, photons of a particular frequency are absorbed and their energy promotes an electron from lower energy level to upper energy level. We perceive the complementary color to the light absorbed.

However, I have a question about this. Once the electron is promoted to a higher energy level, won't it fall back down and give off a photon?

Surely the electron cannot remain at the higher energy level forever, as that would mean that no further electronic transitions could taking place, and the solution would turn colourless.

Absorption of a photon typically results in a vibrationally excited higher electronic state of the same multiplicity.

In most cases, the excited state deactivates through internal conversion in a radiationless process via vibrational energy exchange with solvent molecules. No light is emitted here, but the solvent is actually heated up, although it might not be measurable.

There are however cases, in which the initially formed excited singlet state species first relaxes to its lowest vibrational mode and then emits a photon to reach the ground state.

This deactivation via radiation is known as fluorescence. Fluorescence lifetimes are typically rather short (in the ns range) and the emitted photon has a lower energy than the absorbed one. This means that the emission spectrum is shifted to the red end of the uv spectrum ($\lambda_\mathrm{f} > \lambda_\mathrm{ex}$). The effect is known as Stokes shift.

A classical case for a fluorescent transition metal complex is $\ce{Ru(bpy)3^{2+}}$. 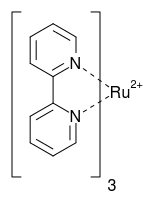 In other cases, the excited singlet state undergoes a change in the spin multiplicity (Intersystem crossing) to a triplet state.

These excited triplet states are usually much longer-lived. When they eventually deactivate via emission of a photon, this process is known as phosphorescence.

Keeping all these processes in mind, one question arises - particular from younger students or pupils:

If our metal complex absorbs a photon and forms an excited state with such a short lifetime, why can we see a nevertheless observe permanent colour?

The answer is in the enormous numbers!

Continuous irradiation with white light means that we send a huge number of photons. Moreover, the solution of our transition metal complexes in a cuvette (or a test tube) also contains more than one molecule. In fact, much more!

As a result, we have a huge number of incidents

Since this happens all the time while we shine the light on our sample and for a lot of molecules, we observe a summary of the events: a coloured solution.

Here's a simple explanation of why that happens:-

First the electron gets promoted to the higher level after absorbing one photon corresponding to the visible light. This makes you see the complementary color, as you already said.

Not the answer you're looking for? Browse other questions tagged coordination-compounds transition-metals color photochemistry or ask your own question.

12
Why is absorbance spectrum continuous and not quantized?
17
What is the reason for the blue color of an ammoniated electron?
1
"Exactly Equal" and "At Least" in electron excitation
21
Why is manganese(II) coloured although the transition should be spin-forbidden?
14
Can flames be colored black?
0
What fluorescent materials absorb visible light and emit UVC light?
3
Colour change when excess ammonia added to [Cu(H2O)6]2+
0
How will the degree of conjugation effect the light emitted? (glow stick reaction)
2
Heat of reaction for the decomposition of AgCl means?