This fourth round of golf concerns the synthesis of plaunotol, a peptic ulcer treatment:

In a departure from previous rounds of synthesis-golf, no stereocentres to worry about (hopefully easier for even more people to get involved), though several challenging alkenes for which the geometry must be controlled.

You may start from anything commercially available in the Sigma Aldrich catalogue, but to make this 'simple' challenge a bit harder, you must make each of the C=C bonds (i.e. no buying in the alkenes that form the product, but you may use an alkene if it is not preserved into the product). 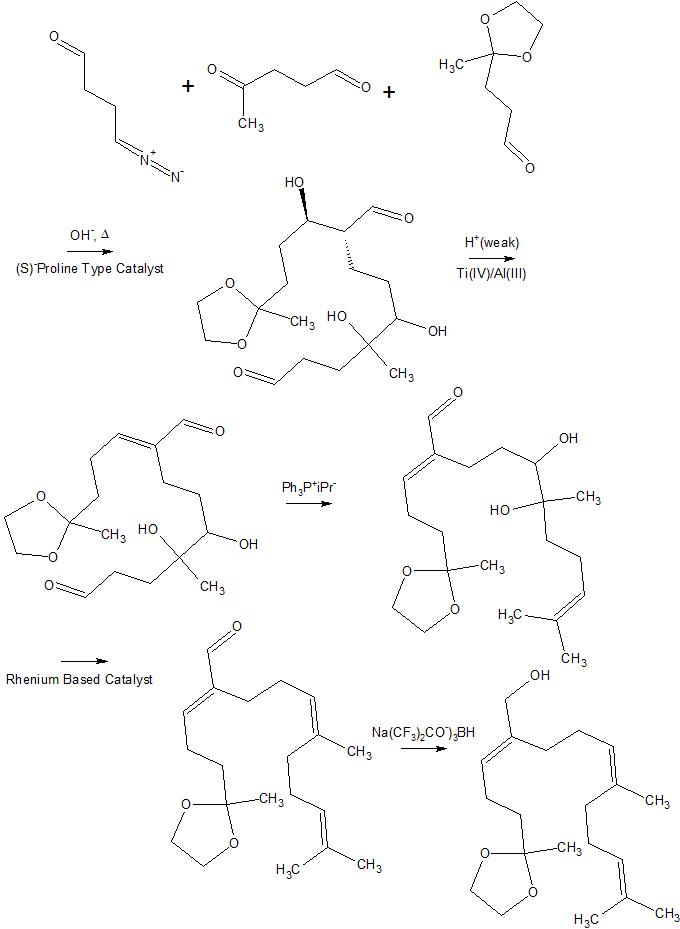 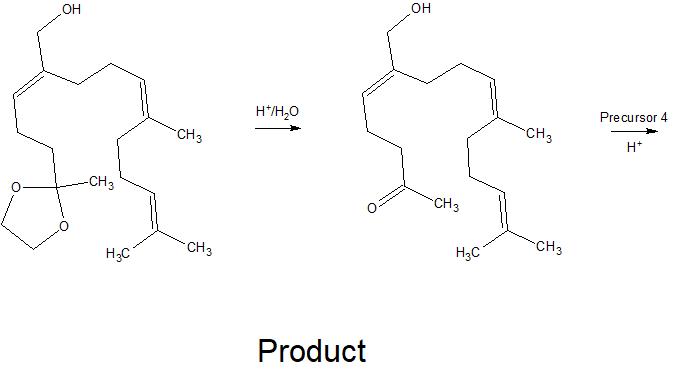 As some might have guessed from the question I asked in the comments and others may have guessed based on the group I’m now working in, I decided to rely strongly on alkyne starting materials to build up the double bonds. Also, each double bond is built up in a different method. Of course, this just ‘works out’ but I also tried to make it happen this way. But enough pre-talk, let’s get to the topic. 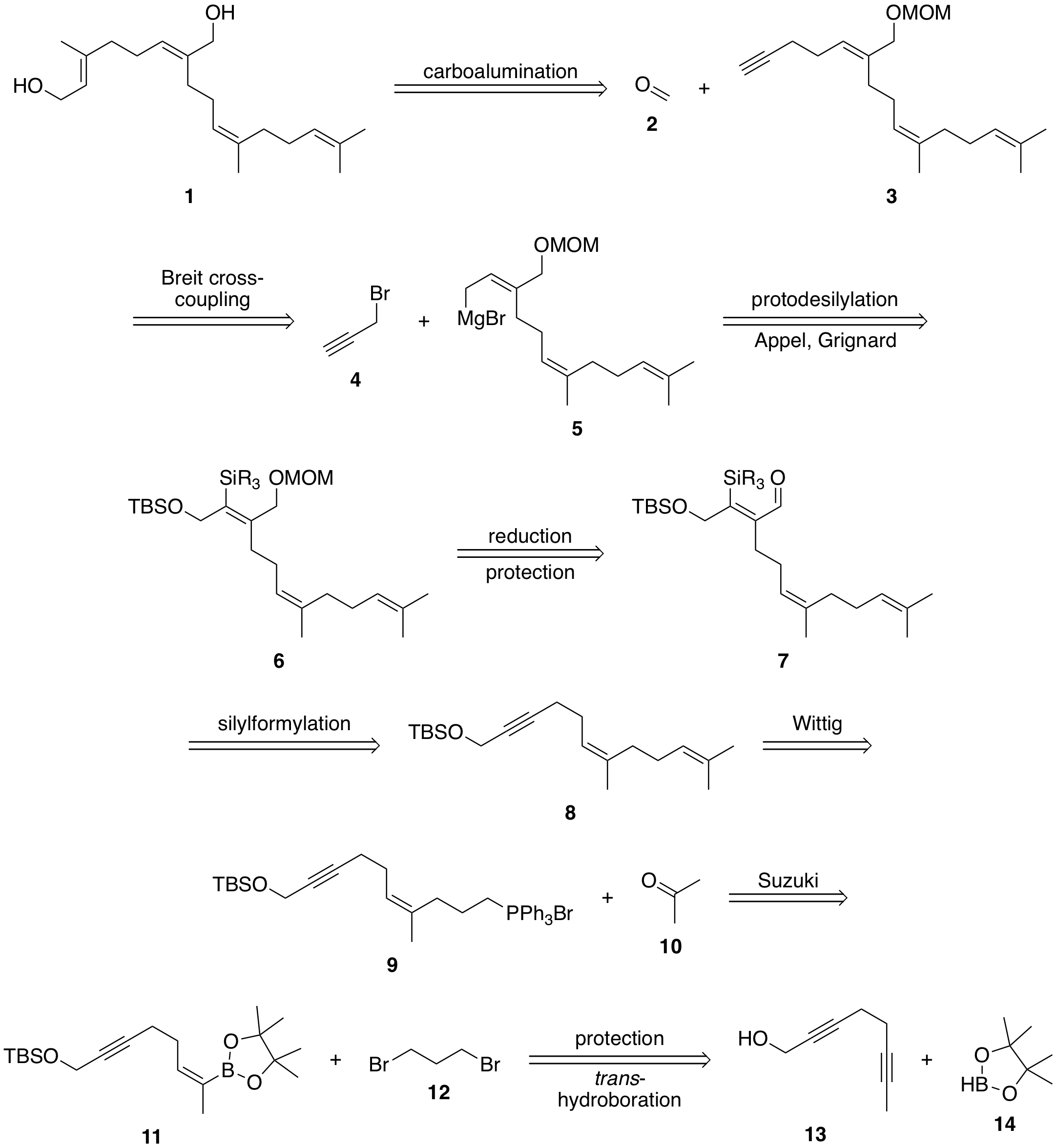 The leftmost double bond can be built up from terminal alkyne 3 using a carboalumination with $\ce{Me3Al}$ and trapping the aluminate with formaldehyde (2). This terminal aldehyde moiety can be introduced in a Breit $\ce{C}_\mathrm{sp^3}\ce{-C}_\mathrm{sp^3}$ cross coupling using propargyl bromide (4) and allyl Grignard 5. To access this intermediate, I envisioned coming from a protected allylic alcohol 6, whose double bond would be synthesised the corresponding alkyne 8 in a silylformylation.

The rightmost double bond can then be built up in a standard Wittig reaction using acetone (10) as the ketone functionality. A Wittig reaction of Wittig salt 9 suggests itself here since this double bond is symmetric so no diastereoselectivity issues are encountered. The corresponding bromide can be accessed in a Suzuki-type cross-coupling using boronate 11 and 1,3-dibromopropane (12). Finally, trans-boronate 11 can be accessed from commercially available (i.e. in Sigma Aldrich’s catalogue) dialkyne 13 in a trans-selective hydroboration.

I chose this order of functionalisation for a number of reasons. Firstly, protecting the primary alcohol of 13 with a bulky silyl protecting group should allow differentiation of the two internal alkynes sterically. While I had originally considered carrying the boronate along the synthesis, I noticed that no harm is done in immediately elaborating the right-hand terminus.

The silylformylation reaction attaches the carbonyl functionality on the less hindered side, meaning that a simple alkyl chain should direct the carbonyl to its side rather than the bulky silyl protecting group. Also, it was necessary to install the silyl before deprotection of the primary alcohol so both deprotections can take place in one step. This leaves only the elaboration of the final, terminal alkyne. It makes sense to have this last since trimethyl aluminium is a very small reactant that could, in principle also attack any remaining internal alkynes. By having only one alkyne functionality present in the molecule, this is no longer a problem. 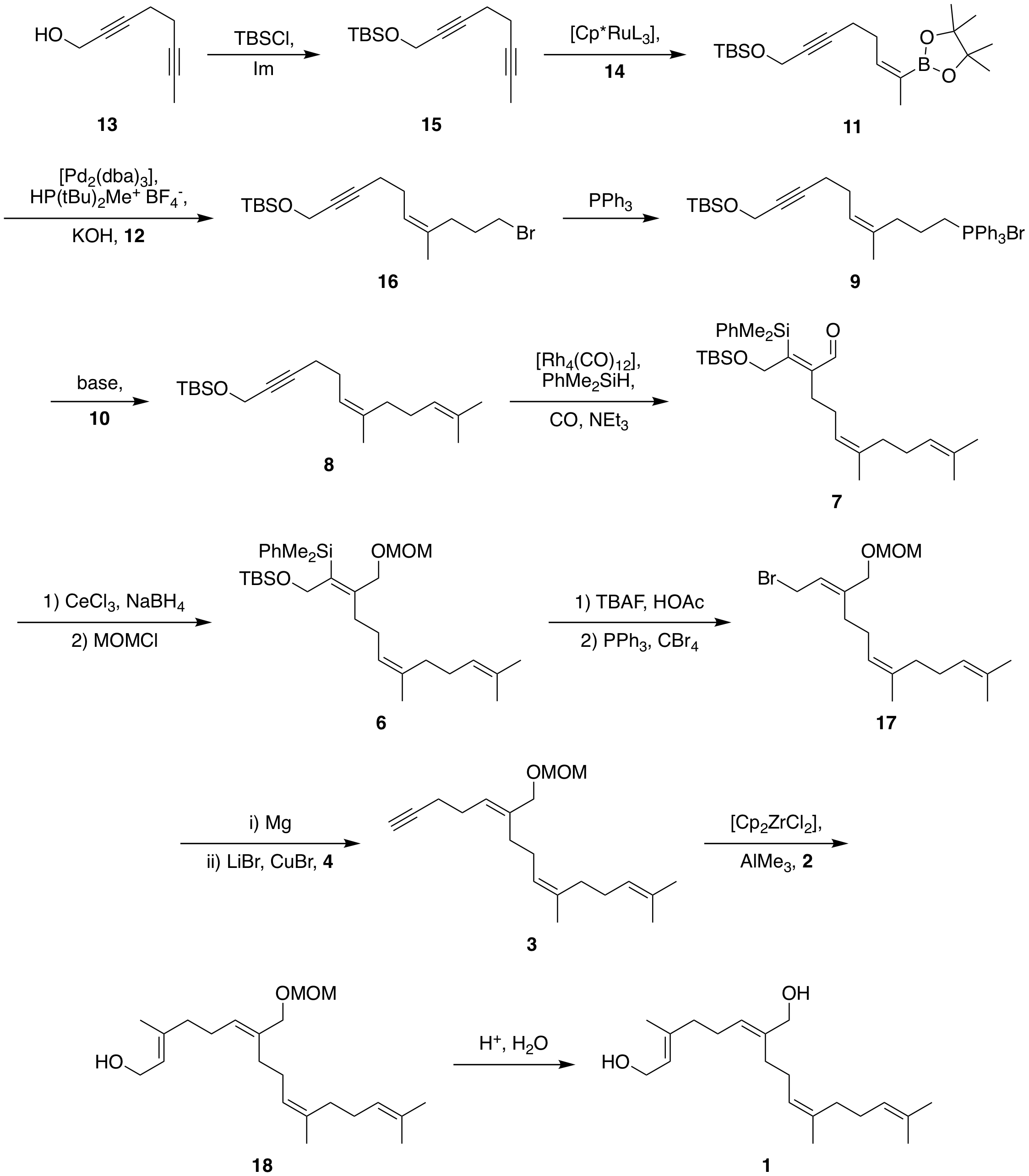 As mentioned earlier, the initial step is the protection of the primary alcohol by the Corey procedure to give silyl 15. Subsequently, Fürstner’s ruthenium-catalysed method of trans-selective hydroboration is used to install the required trans-boronate 11.[1] As mentioned, the selectivity should arise from the bulky silyl group; if necessary, more bulky groups like $\ce{TBDPS}$ can be used instead. The subsequent $\ce{C}_\mathrm{sp^2}\ce{-C}_\mathrm{sp^3}$ cross-coupling with dibromide 12 is performed with $\ce{[Pd2(dba)3]}$ as published by Nishihara et. al. to give bromide 16.[2] This can be transformed into Wittig salt 9 by standard procedures and reacted with acetone to give diene 8 with practically any base.

With the first two double bonds installed now is the time for the silylformylation employing the methodology of Matsuda et al.[3] Thus, tetrarhodium octacarbonyl catalyses the addition of methyldiphenylsilane under positive $\ce{CO}$ pressure to give aldehyde 7. This is reduced under Luche conditions and the resulting alcohol protected with $\ce{MOM}$. Disilane 6 can then be deprotected using $\ce{TBAF}$; I chose to buffer with acetic acid to prevent undesired isomerisations or double bond migrations due to the highly acidic conditions. Potentially, less reactive fluoride sources will also do the trick.

After deprotection, the primary alcohol is converted to bromide 17 in an Appel reaction ($\ce{PPh3, CBr4}$. This bromide 17 is transformed into the corresponding Grignard and coupled in the presence of lithium bromide and $\ce{CuBr}$ with propargyl bromide (4) to give the terminal alkyne 3.[4] Our final remaining double bond is installed under the action of trimethylaluminium and capturing the resulting aluminate with formaldehyde as reported by Patel et al.[5] This only leaves the final acidic deprotection of the $\ce{MOM}$ ether with practically any acid.

Unfortunately, this reaction is linear. It requires 13 steps — formation of the Grignard and subsequent Breit cross-coupling is a one-step two-stage procedure.

Carbon sources are dialkyne 13, dibromide 12, acetone, carbon monoxide, propargyl bromide, trimethyl aluminium and formaldehyde. I confirmed that 13, 12 and 4 are available at Sigma Aldrich and I have no doubt about the availability of the remaining.