Why is the methyl group electron-donating via the inductive effect?

"Hyperconjugation is the stabilising interaction that results from the interaction of the electrons in a σ-bond (usually C-H or C-C) with an adjacent empty or partially filled p-orbital or a π-orbital to give an extended molecular orbital that increases the stability of the system."

How I see "hyperconjugation" is the formation of partial π bonds. Let's say we have a methyl group bonded to a positively-charged carbon atom with a vacant p orbital.

Ideally, it would be best if we could have an atom with a fully-filled p orbital, which is parallel to the p orbital of the this positively-charged carbon atom, to come and interact with this carbon atom. Such an interaction would stabilise the electron-deficient carbon atom. This is essentially the basis of hyperconjugation.

However, in our case, we do not have such an atom with a fully-filled p orbital around. Instead, what we have is a few C-H σ bonds. These C-H bonds are not parallel to the vacant p orbital of the positively-charged carbon atom but they are very close to parallel, around 19.5 degrees away, assuming that the geometry of the methyl group bonded to that positively-charged carbon atom is tetrahedral. 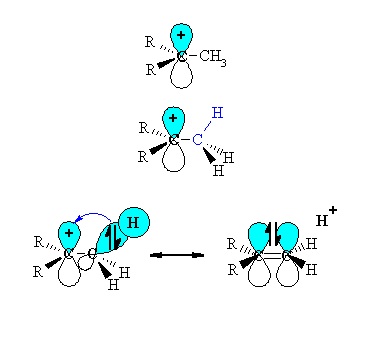 *Please note that the illustration is slightly inaccurate because the hydrogen atom would not pop off the methyl group for the formation of a full π bond between the two carbon atoms. This is only illustrated to better show the interaction of the C-H σ bonds with the p orbital of the positively-charged carbon atom.

3
Inductive effect
7
Why methyl group is 2,4-directing?
12
Why do larger alkyl groups show a greater inductive (+I) effect?
8
Why is methoxy group an electron donating group?
10
Strongest negative inductive effect group between trimethylammonium, ammonium and dimethylsulfonium groups
2
Change in inductive effect of a susbstituent when -R group replaces -H atom