Are there any significant uses of the compound formed by magnesium and anthracene?

In an unusual reaction, magnesium reacts with anthracene in THF to form a grignard-like compound called, prosaically, magnesium anthracene: 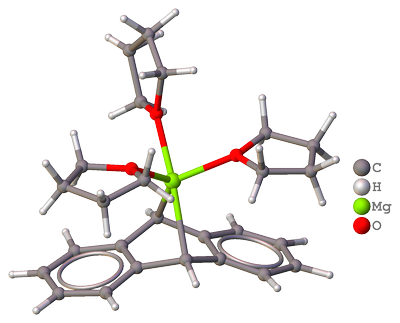 I remember using it briefly in the 1980s. At the time there was speculation about its potential use in both synthesis and as a starting material for hydrogen-storage systems.

Are there any significant current uses of the the unusual complex?

It seems like an idea of using magnesium anthracene systems for the $\ce{MgH2}$ production persisted since 1980s [1] till late 2000s, when new more efficient method with better scalability for industrial use was established.

One of the recent reviews in hydrogen-storage applications [2, p. 220] compares the older two-step process of $\ce{MgH2}$ synthesis:

with the most recent direct synthesis from Mg powders and tablets [3]. Their experimental trial involved the following:

Powder and tablet Mg were placed on trays inside a 50 kg hydrogenation furnace. After purging with Ar, the furnace was ﬁlled with 99.9999% hydrogen with a pressure of less than 2 MPa. The temperature of the process was controlled so as to remain near the boundary between the regions $\ce{\{MgH2\}}$ and $\ce{\{Mg + H2\}}$ in the thermal equilibrium diagram, and maintained for 30–45 h. The hydrogen consumption behavior was monitored by a pressure gauge. Afterward, the furnace was gradually cooled down to room temperature. The hydrogenation yield (%) was calculated via the weight difference of Mg samples before/after the process.

$\ce{MgH2}$ obtained with this method showed a hydrogen yield of around 96% with great reproducibility and scalability, and was proved as industry-ready.

But still, magnesium-anthracene · 3THF is used at a lab-scale in fine organic, organometallic, and inorganic syntheses [4, pp. 300-307]:

Not the answer you're looking for? Browse other questions tagged synthesis hydrogen organometallic-compounds applied-chemistry grignard-reagent or ask your own question.

15
Are there any examples of nuclear spin isomers having consequences for chemical reactivity?
18
Why are there multiple lines in the hydrogen line spectrum?
7
Are there any significant industrial processes that use liquid ammonia as a solvent?
12
What are the pros and cons of using Gilman reagent over Grignard reagent to synthesize a hydrocarbon?
3
How to I identify the diene and dienophile through retrosynthesis of a given compound?
4
Are there any STP liquids not containing large amounts of hydrogen and oxygen that are safe for human contact?
0
What are the products of the Grignard reaction with methyl-magnesium iodide?