Why is gadolinium specifically used in MRI contrast agents?

Gadolinium(III) chelate complexes are routinely used as contrast agents in magnetic resonance imaging (MRI);1 the usual explanation is that paramagnetic species contain unpaired electrons, which cause relaxation of nearby $\ce{^1H}$ nuclei.

Why gadolinium, and not any of the other lanthanides?

In particular, $\ce{Tb^3+/Dy^3+/Ho^3+/Er^3+}$ have magnetic moments that are larger than that of $\ce{Gd^3+}$ (due to orbital angular momentum). At first glance, these should possess even higher relaxivity, since the rate of relaxation due to random fields is proportional to $\langle B_\mathrm{loc}^2 \rangle$.2

I do vaguely recall reading one sentence, about the fact that ground states that aren't S terms are not spherically symmetric, and there's some problem associated with this. But I can't find the reference anymore and I don't remember any other detail.

The reasons may possibly be:

Tissue relaxation results from interactions between the unpaired electron of gadolinium and tissue hydrogen protons, which significantly decrease the T1 of the blood relative to the surrounding tissues.

Additionally, adverse reactions to this agent are far less frequent than those seen with iodinated compounds, with common reactions including nausea, vomiting, headache, paresthesias, or dizziness.

T1weighted sequences are part of almost all MRI protocols and are best thought of as the most 'anatomical' of images, resulting in images that most closely approximate the appearances of tissues macroscopically, although even this is a gross simplification. 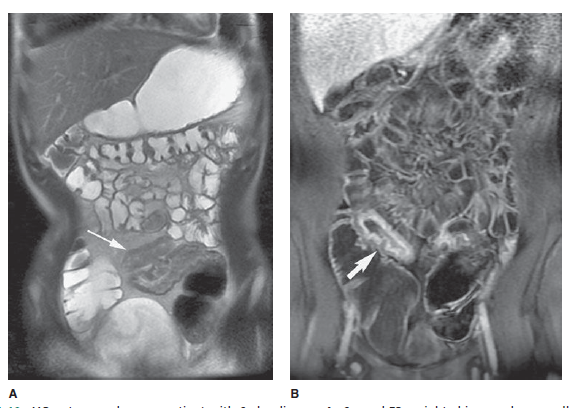 Most of the answer above was based on Pharmacological/Medical aspects but some Chemistry aspects have been included below:

The ability of an agent to affect T1 and T2is characterised by the concentration-normalised relaxivities r1 and r2respectively. These parameters refer to the amount of increase in 1/T1 and 1/T2 respectively, per millimole of agent, and are normally quoted as a rate (mM21 s21).4 The values are used to determine the efficiency of a contrast agent, and they consist of contributions from both inner sphere and outer sphere relaxation mechanisms Negative contrast agents influence the signal intensity by shortening transverse relaxation (T2), thereby producing darker images as high T2 results in increased brightness of the images.

Gadolinium(III) reagents are commonly focused on, due to the coupling of a large magnetic moment with a long electron spin relaxation time of $\ce10^{-9}$s at the magnetic field strengths used in MRI techniques.

Gadolinium (III) ion is unique in a number of respects:

It has the ability to shorten both the longitudinal and transverse relaxation times of water protons approximately to the same extent by relaxing all nearby protons. Other Ln(III) ions with large magnetic moments are less efficient in shortening T1.

The Gadolinium ion is also unique among other Ln(III) because its symmetric seven electron ground state results in an electronic relaxation rate that is six orders of magnitude slower than the other Ln(III) ions. This in turn results in a strong magnetic anisotropy and fast electronic relaxation states with very short T1, on the order of $\ce10^{-13}$s.

Other Ln (III) ions tend to undergo Curie relaxation enhancement arising from the interaction of the nuclear spin with the thermal average of the electron spin. (The Curie-spin relxation effect is significant at lower temperatures and higher magnetic fields and for ions with a large magnetic moment).

It has been observed that the Curie spin relaxation effect affects the transverse relaxation more than the longitudinal relaxation. Consequently paramagnetic Ln(III) other than Gd (III) are less efficient T1 relaxation agents.

Use of other Lanthanide (III) ions as MRI contrast agents

Dysprosium(III) is another lanthanide ion that has been used in MRI, being classed as a negative contrast agent. In the use of high magnetic fields,

Gd(III) based contrast agents exhibit poor water relaxivity. As a result, the interest in dysprosium-based complexes is increasing as they display slow water exchange, due to the need to lengthen the residence time in order to optimise the r2 relaxivity. Dy(III) has a large magnetic susceptibility which induces local field gradients resulting in a lowering of T2.

Generally, dysprosium complexes where the water molecules have a long residence time, possess potential application as negative contrast agents at high magnetic fields due to their efficient transverse relaxivity. However it has been demonstrated that lengthening the residence time of water can actually be detrimental, because the transverse relaxivity can then be limiting.

The overall conclusion from the use of dysprosium(III) complexes as contrast agents is that due to the balancing of factors required to optimise r2, design of a suitable molecular structure is crucial. Fine tuning these residence times of the water protons, and hence the relaxivity, may lead to promising contrast agents for high field magnetic resonance imaging.

Europium(II) analogues have been proposed as alternatives to Gd(III) because they are isoelectronic—each having seven unpaired electrons.

The only problem with this complex was that the stability of the Eu(II) chelate was 107 times higher than that of the Eu(III) chelate, which meant that the Eu(III) complex could be susceptible to dissociation, possibly releasing toxic Eu(III) into the body.

Other strongly paramagnetic ions e.g Tb(III), Ho(III), Er(III) can have significant effect on line widths and such line broadening usually makes it difficult or even impossible to detect nuclei that are located within a certain distance of the lanthanide ion.

There is still promising use of other Lanthanide (III) compounds as contrast agents as alternatives to using T1 shortening contrast agents as contrast can originate from altering proton density or the total water signal that is detected (using another technique called Magnetisation Transfer (MT).In this case Gadolinium(III)cannot be used in this technique because the T1 of water would be too short, but other lanthanides, such as Eu(III), can be used because they have smaller magnetic moments, relaxing bulk water much less efficiently.

Other potential candidates are still being tested under laboratory conditions, Contrast agents used in the body clearly should be biocompatible, but there are also other requisites need to be addressed as well. These include the requirements of rapid renal excretion, water solubility, stability in aqueous conditions, and a low osmotic potential when in solution for clinical work.

Not the answer you're looking for? Browse other questions tagged biochemistry nmr-spectroscopy magnetism rare-earth-elements or ask your own question.

6
Why is a squared cosine window function commonly used for 2D spectra?
5
Why is the Gaussian Window Function used to enhance resolution in 1D NMR spectra?
8
Why is iron used in the body?
18
Why is europium used in Euro bank notes?
12
Why is tetramethylsilane (TMS) used as an internal standard in NMR spectroscopy?
6
What are contrast agents in MRI and how do they work?
7
Why are lactate and lactic acid used synonymously in biochemistry?
16
Why is crystallography still used in some cases for small molecule structure determination?
2
Why can DAP be used to elute a protein in affinity chromatography?
1
Why is it important to remove the used up electrons in oxidative phosphorylation?