I am not a chemist, but a neuroscientist, so bear with me. I have struggled with this problem for over a week now and have realized it's a chemical question. I'll try to explain it so no neuroscience background is needed.

I am trying to fit a model to experimental data. The data describes how a certain channel opens and closes in response to a change in membrane potential of the cell the channel sits in. This is captured in two datasets:

The gate n, too, can be described by its fraction of open-state/total. The rates of n moving between these two states are described by $\alpha_n$ and $\beta_n$. Once there are four gates in the open-state, the channel is instantly open. If I try to describe this in a chemical reaction, I would guess something like:

where $C_n$ and $O_n$ depict 'closed' and 'open' n-gates respectively. And

but I cannot figure out how $\tau_n$ and $\tau_{G/G_{max}}$ are related to each other. Even though the reaction 4O --> open channel is instant, the shape of approaching the equilibrium differs and thus the point that they cross 1-1/e would as well. n will reach its equilibrium with a single exponential, while G/G$_{max}$ reaches it with an exponential to the fourth power.

I think the answer should be quite simple, and should only depend on the 4'th power.

I hope my question is clear, but if there are more details that will help solve this I am more than happy to clarify certain points.

Edit: Here is a figure that shows how the 'measured' time constant and the one for the differential variable n differ. Also, it shows that there is not a linear relationship. 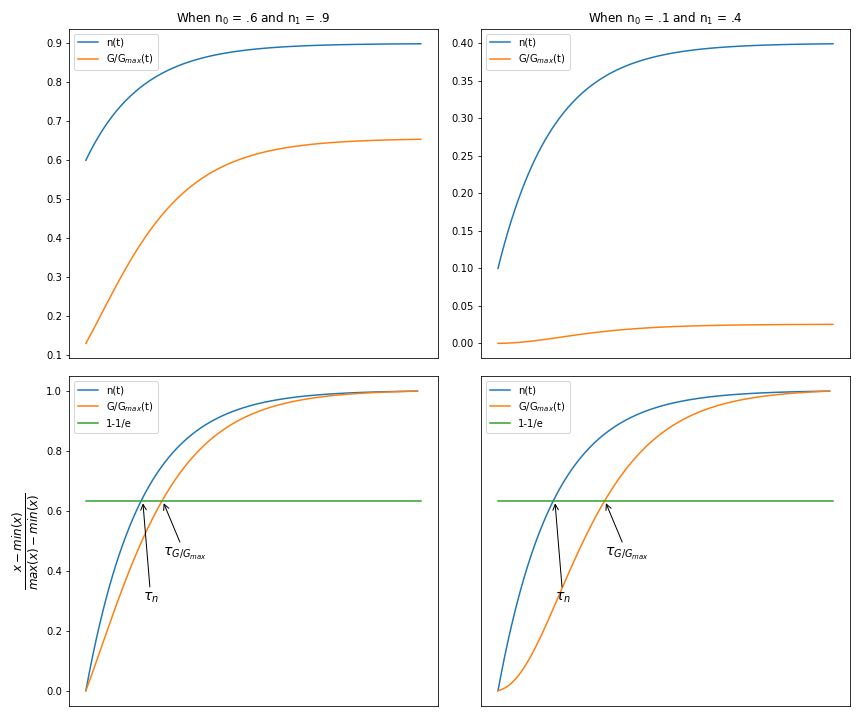 Just to be clear about what I did:

As one of the answers pointed out (sort of), a solution to this system with initial condition V1 is:

To find the $\tau$ of either of these traces (the time constant being the time it takes to reach $1-1/e \cdot$(final value) (see link), I plotted:

I think I understood your question now. I will reformulate it in more 'chemical' terms and give you my solution. Not nicely formatted for now, I will do that later if I find the time.

At steady-state, i.e. when $G_o$ stops changing, you have:

What you measure is the time it takes, when the voltage is abruptly changed from an initial value to a final value, for the number of open channels to go from an initial value to 'equilibrium'. This time is in theory infinite, but in practice it is probably the time it takes for the number of open gates to go from its steady-state value at voltage $V_1$, to a value sufficiently close to the new steady-state value at voltage $V_2$.

If so, it is sufficient to solve the above differential equation for $G_o$ with initial conditions $(t=0,G_o=G_{o,V_1})$. The solution is:

The difficulty I see is the arbitrary nature of the 'time' you consider sufficient to reach steady-state. I would rather fit time points, i.e. number of open gates vs time. And my earlier suggestion to use numerical fitting may still be valid, actually.

Not the answer you're looking for? Browse other questions tagged equilibrium kinetics computational-chemistry or ask your own question.

8
How to calculate the equilibration time of two connected chambers of salt solution, initially at different concentrations?
9
How does initial rate of reaction imply rate of reaction at any time?
2
Justify assuming first-order kinetics for a complex
3
Calculating Vmax (or Kcat) given specific activity of an enzyme over length of time incubated with an activator
1
First order differential equation for transmembrane diffusion
1
Derivation of formula for Hydrolysis constant
1
An equilibrium reaction in the presence of other fast reactions -- is it necessary also to consider the individual rate constants?
2
Can't fit an exponential curve to the decomposition of hydrogen peroxide