Use of geometry index for the determination of coordination environment

Geometry index $\tau$ is supposed to resolve proper geometry for coordination numbers (C.N.) 4 and 5 based on its extreme values ($0$ or $1$). There is also a web app Geom which handles both cases for a structure in XYZ format.

I'd like to summarize the questionable topics regarding proper and efficient usage of this method:

Q1. I'm not sure how to address the intermediate values. Say, for $\tau_5 = 0.33$: is it a square pyramidal geometry with a character of trigonal bipyramid? Or one can just name this coordination environment square pyramid and call it a day?

Q2. Are there similar algorithms developed for the higher C.N.:

By this criterion, the irregular co-ordination geometry of $\ce{[Cu(bmdhp)(OH2)]2+}$ in the solid state is described as being $48\%$ along the pathway of distortion from square pyramidal toward trigonal bipyramidal.

For your second question, while I haven't been able to find a $\tau_7$ or $\tau_8$ used in the literature, it seems possible to define such parameters under the right conditions. To devise a $\tau_8$, we can see that for a regular cube $\ce{MX_8}$, there can only be bond angles of $70.5^\circ$ (between adjacent $\ce{X}$ in the same square) and $109.5^\circ$ (between opposite corner $\ce{X}$ of the same square or between corner $\ce{X}$ of different squares). However, an antiprism instead has an angle of $99.6^\circ$ separating the $\ce{X}$ of different squares. 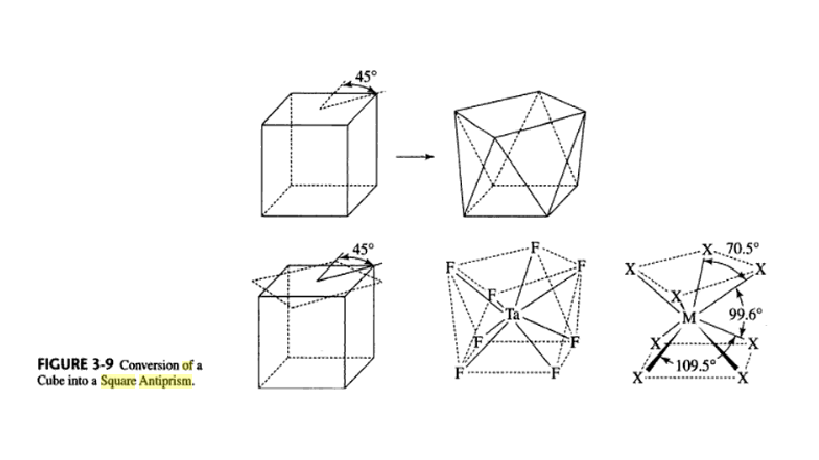 (Image obtained from Inorganic Chemistry by Miessler and Tarr)

This will only work if the structure is a regular antiprism (i.e an anticube). The same is true for defining $\tau_7$ between a pentagonal bipyramid and a monocapped trigonal prismatic. This is because the angles for these will vary if all the attached groups are not the same and so a consistent scheme based on the angles would not suffice.

I also imagine that $\tau_7$ would be harder to define in this way because I don't think there is pair of angles that on its own could describe the distortion between the two geometries.

Not the answer you're looking for? Browse other questions tagged coordination-compounds crystal-structure molecular-structure crystallography or ask your own question.

10
Geometry of the pentachloridoindate(III) anion