Why do dithiins have 8 π-electrons?

It is mentioned on Wikipedia that dithiins have 8 π-electrons. Why is this so?

I was thinking it would suffice for just one of the lone pairs on one of the sulfur atoms to participate in resonance delocalization and hence give dithiin a total of 6 π-electrons, but why does the other lone pair on the other sulfur delocalize as well to give a total of 8 π-electrons?

TL;DR Ab initio HF molecular orbital studies of the potentially antiaromatic $8\pi$-electron systems of distorted and planar 6-membered rings revealed that conformational rigidity (calculated or measured folding energies) is most likely the best extension to a $(4n+2)\pi$ criterion. 1,4-Dithiins experience large energy decreases when permitted to fold, and when no external strains are applied, there is no reason for sulfurs to unevenly donate electronic pairs. 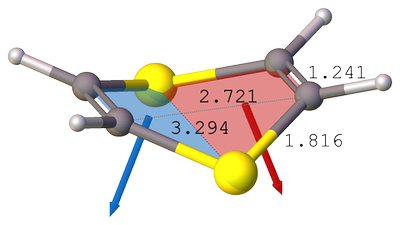 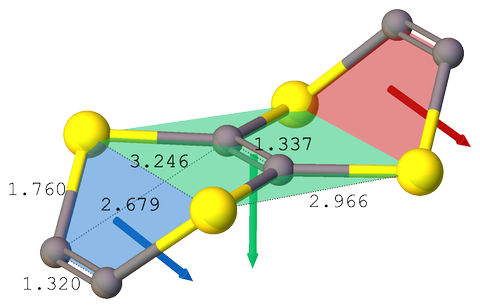 The chair conformation of the molecule prevents conju­gation, and the C-C bond distances clearly corresponds to normal unconjugated bonds, (simple double bond = 1.337(6) Å) so the molecule is non-aromatic in the solid state.

Theoretical calculations ($\Delta_fH^\text{MNDO}$) suggest that both molecules remain bent not only in crystal structure, but they also are flexible in gas phase and in solution [3].

At this point one might think that geometrical conformation dictates the aromaticity or the lack thereof, which is in my opinion an example of violation of the law of cause and effect. Under certain "strains" 1,4-dithiins can exhibit planar structure, like in case of 1,4-dithiine-tetracarboxylic N,N'-dimethyldi-imide acridine [4], where $\pi$-stacking causes a coplanar arrangement of both molecules: 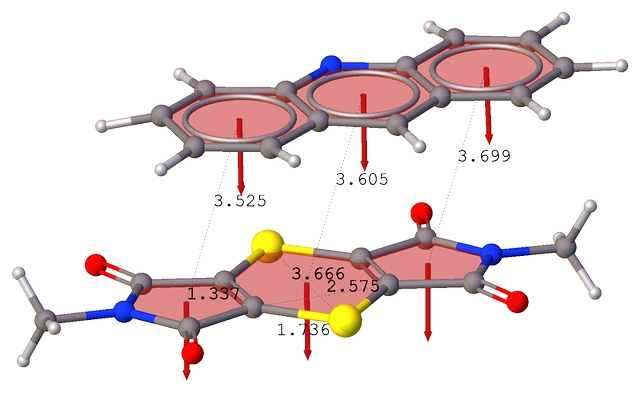 The intermolecular distances ... are shorter than the van der Waals distance (3.40 Å). This suggests that $\pi-\pi$ interactions between molecules ... exist in these parts and the molecules form a paired molecular group. The dihedral angle between the least-squares planes of molecules ... is $2.3^\circ$}. Distances between paired groups are larger than the van der Waals distances... The stacking of paired molecules is in accordance with the poor electrical conductivity of this complex.

Anti-aromatic 1,2-dithiins display properties opposite to those of 1,4-dithiins, whose dications show aromatic stabilization. Unlike other antiaromatic compounds, the 1,2-dithiin derivatives, with eight $\pi$-electrons ..., appear in natural products synthesized by composite plants. The Dewar resonance energies of nonplanar 1,2-dithiins are close to zero. The aromatic 1,4-dithiin dication is generated by two-electron electrooxidation of the neutral 1,4-dithiin. The aromaticity was established by NMR measurements and theoretical calculations.

Conformational criterion for aromaticity and antiaromaticity has been extensively investigated for a number of $8\pi$-electron systems [5], and for 1,4-dithiin the energy required to force it into planar geometry is less than $\pu{2.7 kcal/mol}$ (max. value of 3-21G folding energy), allowing for a high degree of conformational flexibility. This seems to be one of the most recent methods of quantitative determination of both flexibility and aromaticity, as authors propose:

Relative to planar reference geometries of maximum symmetry, folding of aromatic and antiaromatic systems results in large endothermic and exothermic changes, respectively. Aromatic compounds are planar and strongly resistant to folding, whereas antiaromatic systems exhibit large energy decreases when permitted to relax (fold) from planar geometries to nonplanar, minimum-energy conformations. According to this criterion, systems ... which have shallow folding energy curves, are nonaromatic.

Of course, $6\pi$-aromaticity can be achieved via electrooxidation of non-aromatic 1,4-dithiine, which leads to a planar dication which exhibits aromatic character [6]:

Being antiaromatic, they [meaning 1,4 dithiins] are nonplanar and can be oxidized to their radical cations.

If 1,4 dithiins are nonplanar, then that nonplanarity is there to remove antiaromatic coupling. We really have a ring rendered nonaromatic by reduced conjugation like cyclooctatetraenes.

Not the answer you're looking for? Browse other questions tagged organic-chemistry resonance heterocyclic-compounds aromaticity or ask your own question.

5
Why is only one lone pair in imidazole delocalised?
4
Reactivity of thioesters with respect to nucleophilic attack
9
Participation of Pi-bonds and lone pairs in resonance
3
Are all lone pairs considered as π-electrons?
1
Why is aniline more basic than pyrrole?
4
Is 2-pyrone an aromatic compound?