My two questions: Is replication of recording $\text{IC}_{50}$ values prior to (primary?) publication less common than performing a reaction several times to determine a more reliable record? Provided the very small quantities used in these tests (vide infra), should a synthetic chemist rather stay skeptic if a newly isolated material is described as highly potent?

In a literature seminar, the story/history of maoecrystal V, a highly congested polycyclic natural product was presented: 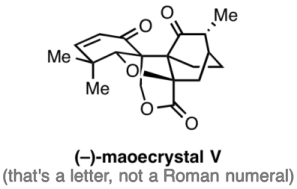 (source first part of an overview)

About a year ago, the Baran group published again efforts towards this compound (doi 10.1021/jacs.6b06623, ACS AuthorChoice / open access), displaying again tremendous efforts in the lab. With larger quantities of the material in hand, however, the initially claimed activity against cancer cells (not only against HeLa) could not be confirmed.

The supporting information of the last paper sheds some light on the frugal scale the $\text{IC}_{50}$ values were recorded:

Which would refer to low umol quantities of the material deployed per test. Still, the question arises why the initially reported activity differs so greatly from the one eventually determined. (Speculation: perhaps fewer groups would have joined the challenge to prepare the material if interested merely in its architecture.)

For the interaction of Maoecrystal V and other, already known, agents for example facing HeLa cells, page S52 of the SI of the 2016 publication shows this plot: 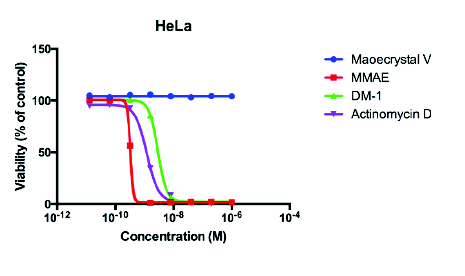 I have worked in natural product isolation a little. Although I have never witnessed tests with HeLa cells, I can provide some insight into the general screening procedure.

In the lab I worked in which dealt with isolation of myxobacterial natural products, a novel strain was first tested as a crude extract in a preliminary screening via serial dilution assay. Tests were performed against a set of standard screening organisms including S. aureus, Candida albicans, E. coli and a few others I forgot.

If an isolated showed enough inhibitory activity at this stage, a semipreparative HPLC was performed to locate the peak(s) which caused said activity. The HPLC fractions were collected in a 96-well plate, the solvent removed by nitrogen flow and then the well plate was infected with the organism of interest. Hopefully, one or two wells would remain with out bacterial or fungal growth and hopefully these would not be in the fatty acid realm at the end of the 96 wells.

After that, a slightly larger separation was performed with the goal of gaining a few milligrams of the active compound (after confirming via HR-MS and dereplication that it was not already known) to perform another serial dilution assay to identify the minimal inhibitory concentration (MIC) — the isolationists’ equivalent to an $\mathrm{LD_{50}}$. This was typically performed around three times.

After that, the paper was drafted and submitted to peer review.

(Okay, there are a few steps I left out, but they contain other, unrelated stuff like making sure the myxobacterium was properly classified, elucidating the structure, hoping for crystals and maybe even performing some low-scale fermentation of the relevant myxobacteria to gain enough sample for proper structure elucidation. Ths last step could also preceed the MIC value determination.)

Not the answer you're looking for? Browse other questions tagged synthesis medicinal-chemistry or ask your own question.